Maybe you didn’t realize that the Senate and the House each have a chaplain.  If you are a C-SPAN junky you might have seen them open each daily session.  The Senate website has a brief description of the office and history.

Throughout the years, the United States Senate has honored the historic separation of Church and State, but not the separation of God and State. The first Senate, meeting in New York City on April 25, 1789, elected the Right Reverend Samuel Provost, the Episcopal Bishop of New York, as its first Chaplain. During the past two hundred and seven years, all sessions of the Senate have been opened with prayer, strongly affirming the Senate’s faith in God as Sovereign Lord of our Nation. The role of the Chaplain as spiritual advisor and counselor has expanded over the years from a part-time position to a full-time job as one of the Officers of the Senate.  The Office of the Chaplain is nonpartisan, nonpolitical, and nonsectarian.

But the current Senate Chaplain, Barry C. Black, has begun to make news with what the New York Times called “our daily Senate scolding.”

The disapproval comes from angry constituents, baffled party elders and colleagues on the other side of the Capitol. But nowhere have senators found criticism more personal or immediate than right inside their own chamber every morning when the chaplain delivers the opening prayer.

“Save us from the madness,” the chaplain, a Seventh-day Adventist, former Navy rear admiral and collector of brightly colored bow ties named Barry C. Black, said one day late last week as he warmed up into what became an epic ministerial scolding.

“We acknowledge our transgressions, our shortcomings, our smugness, our selfishness and our pride,” he went on, his baritone voice filling the room. “Deliver us from the hypocrisy of attempting to sound reasonable while being unreasonable.”

In case you were wondering, Chaplain Black was selected in 2003 by then Majority Leader, Republican Bill Frist.  He says of his politics

“I use a biblical perspective to decide my beliefs about various issues,” Mr. Black said in an interview in his office suite on the third floor of the Capitol. “Let’s just say I’m liberal on some and conservative on others. But it’s obvious the Bible condemns some things in a very forceful and overt way, and I would go along with that condemnation.”

But back to some of his recent prayers.

During his prayer on Friday, the day after officers from the United States Capitol Police shot and killed a woman who had used her car as a battering ram, Mr. Black noted that the officers were not being paid because of the government shutdown.

Then he turned his attention back to the senators. “Remove from them that stubborn pride which imagines itself to be above and beyond criticism,” he said. “Forgive them the blunders they have committed.”

Senator Harry Reid, the pugnacious majority leader who has called his Republican adversaries anarchists, rumps and hostage takers, took note. As Mr. Black spoke, Mr. Reid, whose head was bowed low in prayer, broke his concentration and looked straight up at the chaplain.

“Following the suggestion in the prayer of Admiral Black,” the majority leader said after the invocation, seeming genuinely contrite, “I think we’ve all here in the Senate kind of lost the aura of Robert Byrd,” one of the historical giants of the Senate, who prized gentility and compromise. 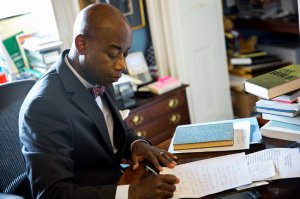 Chaplain Black is a federal employee who is not being paid during the shutdown.  He is also one of the few adults in the Senate chamber.

Mr. Black, who is the first black Senate chaplain as well as its first Seventh-day Adventist, grew up in public housing in Baltimore, an experience he draws on in his sermons and writings, including a 2006 autobiography, “From the Hood to the Hill.”

In his role as chaplain, a position that has existed since 1789, he acts as a sounding board, spiritual adviser and ethical counselor to members of the Senate. When he prays each day, he said, he recites the names of all 100 senators and their spouses, reading them from a laminated index card.

It is not uncommon for him to have 125 people at his Bible study gatherings or 20 to 30 senators at his weekly prayer breakfast. He officiates weddings for Senate staff members. He performs hospital visitations. And he has been at the side of senators when they have died, most recently Daniel K. Inouye of Hawaii in December.

The Senate is lucky to have him and maybe they need to pay more attention to what he is saying.

“I remember once talking about self-inflicted wounds — that captured the imagination of some of our lawmakers,” he said. “Remember, my prayer is the first thing they hear every day. I have the opportunity, really, to frame the day in a special way.”

His words lately may be pointed, but his tone is always steady and calm.

“May they remember that all that is necessary for unintended catastrophic consequences is for good people to do nothing,” he said the day of the shutdown deadline.

“Unless you empower our lawmakers,” he prayed another day, “they can comprehend their duty but not perform it.”