One played the piano and hosted a wonderful radio show; the other was a writer who wrote about jazz and blues (among many other things) and whose prose style was said to reflect those musical styles.  Marion McPartland was 95; Albert Murray, 97.

Marion McPartland was a white English woman in the world of American jazz first coming to New York in 1964.  Her New York Times obituary quotes the critic Leonard Feather

Mr. Feather, she [McPartland] added, “always used to tell me it was a joke, but I don’t think he meant it as a joke.”

Little did he know.  After many several years  of touring with her husband, Jimmy McPartland’s group, she struck out on her own.

The bare-bones accompaniment of bass and drums was always Ms. McPartland’s preferred format, but she also appeared in concert with symphony orchestras, and in 1996 she recorded an album of her own compositions, “Silent Pool,” on which she was accompanied by a string orchestra. 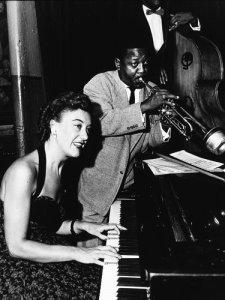 Marian McPartland, who became an articulate spokeswoman for jazz, and the jazz trumpeter Roy Eldridge around the 1950s.

But what she will most be remembered for in the United States is “Piano Jazz”.

Ms. McPartland’s contributions to jazz were not limited to her piano playing. An enthusiastic and articulate spokeswoman for the music, she lectured at schools and colleges and wrote for Down Beat, Melody Maker and other publications. (A collection of her essays, “All in Good Time,” was published in 1987 and reissued in 2003.) Most notably, for more than 30 years her “Piano Jazz” was one of the most popular jazz shows ever on the radio.

The show, produced by South Carolina’s public radio network, made its debut on NPR in 1978. The format was simple: an informal interview interspersed with extemporaneous duets.

“I didn’t have any idea I’d be good at something like this,” Ms. McPartland told The Associated Press in 2000. “I certainly never thought people would know me because of my voice.” But she proved a natural.

As its title suggests, “Marian McPartland’s Piano Jazz” was originally a show about piano players. But the guest list came to include vocalists, among them Mel Tormé, Tony Bennett and even Willie Nelson and Elvis Costello, as well as trumpeters, saxophonists and other instrumentalists.

I listened on the radio and in recent years often streamed it though headphones at work.  She was understated in her interview style and never got too tangled in the technical aspects of the music she and her guest were performing.  Her voice was instantly recognizable.

In her last years Ms. McPartland received numerous honors. She was named a National Endowment for the Arts Jazz Master in 2000, given a lifetime achievement Grammy Award in 2004, inducted into the National Radio Hall of Fame in 2007 and named a member of the Order of the British Empire in 2010.

And she continued playing almost to the end. Reviewing her appearance at Dizzy’s Club Coca-Cola in Manhattan the night before her 90th birthday in 2008, Nate Chinen wrote in The Times, “Ms. McPartland still has her pellucid touch and her careful yet comfortable style.”

Albert Murray was not a musician.  In fact he was about as different from Marion McPartland as one could be.  Murray was black (a term he disliked), he was born in the segregated American south, and he was an academic.  The New York Times said in his obituary

As blacks fought in the streets for civil rights, black integrationists and black nationalists dueled in the academy and in books and essays. And Mr. Murray was in the middle of the debate, along with writers and artists including James Baldwin, Richard Wright, Romare Bearden and his good friend Ralph Ellison.

One of his boldest challenges was directed toward a new black nationalist movement that was gathering force in the late 1960s, drawing support from the Black Panthers and the Nation of Islam, and finding advocates on university faculties and among alienated young blacks who believed that they could never achieve true equality in the United States.

With a freewheeling prose style influenced by jazz and the blues — Duke Ellington called him “the unsquarest man I know” — Mr. Murray challenged conventional assumptions about art, race and American identity in books like the essay collection “Stomping the Blues” and the memoir “South to a Very Old Place.” He gave further expression to those views in a series of autobiographical novels, starting with “Train Whistle Guitar” in 1974.

Mr. Murray insisted that integration was necessary, inescapable and the only path forward for the country. And to those — blacks and whites alike — who would have isolated “black culture” from the American mainstream, he answered that it couldn’t be done. To him the currents of the black experience — expressed in language and music and rooted in slavery — run through American culture, blending with European and American Indian traditions and helping to give it its very shape and sound.

“The United States is not a nation of black and white people,” Mr. Murray wrote. “Any fool can see that white people are not really white, and that black people are not black.” America, he maintained, “even in its most rigidly segregated precincts,” was a “nation of multicolored people,” or Omni-Americans: “part Yankee, part backwoodsman and Indian — and part Negro.” 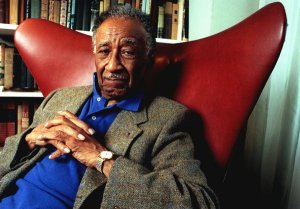 Albert Murray in his home in Harlem in 1998

He wrote often about blues and jazz as part of the American culture.

In Mr. Murray’s view, the essential bond between American culture and what he called Negro culture is the shared embrace of a “blues aesthetic,” which he said permeated the works of black musicians, writers and artists and was being increasingly adopted by whites. To Mr. Murray, the blues were “the genuine legacy of slavery,” Laura Ciolkowski, a professor of literature now at Columbia University, wrote in The New York Times Book Review in 2002.

“For him,” she wrote, “blues music, with its demands for improvisation, resilience and creativity, is at the heart of American identity.”

In “Stomping the Blues” (1976), he argued that the essence of the blues was the tension between the woe expressed in its lyrics and the joy infusing its melodies. He saw the blues, and jazz, as an uplifting response to misery.

“The blues is not the creation of a crushed-spirited people,” Mr. Murray said years later. “It is the product of a forward-looking, upward-striving people.”

He next began a long collaboration with Count Basie on his autobiography, “Good Morning Blues,” which was published in 1985, a year after Basie’s death. Along with the writer Stanley Crouch and the trumpeter Wynton Marsalis, Mr. Murray was actively involved in the creation of Jazz at Lincoln Center, the institution’s first permanent jazz program.

Murray tried to help us understand that our American culture is not purely one thing or another, but a mix.  That mix is what makes us different from any other country in the world.

I couldn’t find any mention of a meeting between McPartland and Murray, but I can’t imagine that they never met.  I hope they are with the other jazz and blues performers and critics gone before them talking and improvising.