When I started hearing about the possibility of the treasury minting a trillion dollar coin which could end all the endless debates about the debt ceiling, I thought it was a joke.  Turns out, that is only partly true.  Here are two views of the platinum coin.

The first is Neil Irwin’s as posted on the Wonkblog.

I’ll lay out this econo-pundit’s conclusion upfront: I hate the platinum coin idea. But if there is no resolution of the debt ceiling through the legislative process, I hate some of the alternatives more.

The issue, for those who need a refresher: To avoid running into the debt ceiling in the next couple of months, the Treasury secretary could exploit a legal loophole, create a platinum coin, assign it a value of $1 trillion or some other very high number, and deposit it at the Fed, thus enabling the government to carry out its previously promised tax and spending policies without broaching the legal cap on debt issuance.

To back up a minute, it is important to understand what the debt ceiling does, and why it is problematic. Congress passes laws to spend money: This many dollars for fighter aircraft, Social Security benefits paid according to such and such formula, and so on. It passes laws to enact a tax code. And the difference between that spending and the money raised in taxes the government funds by issuing debt. But Congress also has a third constraint: An overall ceiling on how much debt the Treasury can issue. In the past, Congress has raised that ceiling to whatever it needed to be to match the previously approved taxes and spending as a matter of course.

Now, House Republicans are viewing the debt ceiling differently. They are treating the debt ceiling–and the need to raise it–as a lever through which to try to win battles over spending that they lost in previous negotiations. They want to not pass an increase to the debt ceiling unless they get some major concessions from Democrats on cutting spending—concessions that Democratic senators and the White House say are non-starters.

So the idea of the trillion dollar coin would be to put this whole impasse to rest.  Irwin goes on to explain what the coin would not do.

A couple of the widespread objections don’t hold water. So long as the Federal Reserve does its job, the platinum coin would not be inflationary. In the current ultra-low interest rate environment, the Treasury depositing a $1 trillion coin at the Fed would not affect the supply of money in the broader economy any differently from it issuing $1 trillion in Treasury bills. Nothing about the platinum coin would prevent the Fed from hiking interest rates when it sees an inflationary threat on the horizon.

That’s not to say a platinum coin gambit would be much fun for the Fed. Chairman Ben Bernanke and New York Fed president Bill Dudley would face a moment of truth, and scores of Fed lawyers would be working overtime, as the central bank had to decide whether to treat the $1 trillion coin as a legal deposit. The Fed in general hates to end up in the middle of political disputes, and this would be a highly uncomfortable spot.

On the other side is Paul Krugman who begins by explaining the whole debt ceiling business.

Where does the debt ceiling fit into all this? Actually, it doesn’t. Since Congress already determines revenue and spending, and hence the amount the Treasury needs to borrow, we shouldn’t need another vote empowering that borrowing. But for historical reasons any increase in federal debt must be approved by yet another vote. And now Republicans in the House are threatening to deny that approval unless President Obama makes major policy concessions.

It’s crucial to understand three things about this situation. First, raising the debt ceiling wouldn’t grant the president any new powers; every dollar he spent would still have to be approved by Congress. Second, if the debt ceiling isn’t raised, the president will be forced to break the law, one way or another; either he borrows funds in defiance of Congress, or he fails to spend money Congress has told him to spend.

So in reality, Congress would just have to authorize borrowing money that they have already said could be spent.  And part of the issue is that not enough people are working and paying enough taxes to create enough revenue.  In some ways you can understand the Republicans who want to set a fixed amount for a budget and then make everything fit.  No borrowing.  But then you have things like Hurricane Sandy and extra spending for the Bush wars for which no revenue was ever raised, and etc., etc. and we end up either cutting things no one wants to cut or borrowing.  Back to Krugman.

Finally, just consider the vileness of that G.O.P. threat. If we were to hit the debt ceiling, the U.S. government would end up defaulting on many of its obligations. This would have disastrous effects on financial markets, the economy, and our standing in the world. Yet Republicans are threatening to trigger this disaster unless they get spending cuts that they weren’t able to enact through normal, Constitutional means.

Republicans go wild at this analogy, but it’s unavoidable. This is exactly like someone walking into a crowded room, announcing that he has a bomb strapped to his chest, and threatening to set that bomb off unless his demands are met.

Which brings us to the coin.

Here’s how it would work: The Treasury would mint a platinum coin with a face value of $1 trillion (or many coins with smaller values; it doesn’t really matter). This coin would immediately be deposited at the Federal Reserve, which would credit the sum to the government’s account. And the government could then write checks against that account, continuing normal operations without issuing new debt.

But wouldn’t the coin trick be undignified? Yes, it would — but better to look slightly silly than to let a financial and Constitutional crisis explode.

A downgrade of the United States credit rating again will end up costing us in interest which seems to me to defeat the purpose since we will probably have to borrow more to pay extra to borrow.  Maybe enough Republicans will join with enough Democrats to raise the ceiling to a trillion dollars and we won’t need the magic coin.  This is what Irwin is hoping for.

The platinum coin gambit could be terrible for the U.S. government’s long-term standing as a premier destination for global capital. This is a moment for Republicans to take responsibility for governing and to accept the fact that their leverage is limited with control of only one house of Congress. But if the alternative truly is default, a crazy coin option may indeed be less bad than the alternatives. 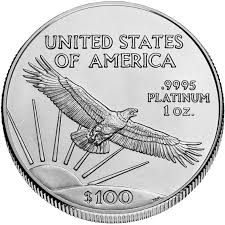 What would be on the other side?  Some suggestions include the Cat in the Hat, Alfred E. Newman (both sent in to the Takeaway) and my favorite idea, Mark Twain who once said, “Suppose you were an idiot. And suppose you were a member of Congress. But I  repeat myself.”