One of my friends asked if she would go to hell because she was glad that Antonin Scalia was dead.  I have mixed feelings.  First, I’m very sad for his family as sudden death is always difficult.  On the other hand, I am happy he is no longer a factor on the Supreme Court.  Justice Ruth Bader Ginsberg wrote on the the nicest tributes I’ve seen.  This is from Vox.

So it’s no surprise that of all the tributes to Justice Scalia, who died Saturday of an apparent heart attack at the age of 79, Justice Ginsburg’s is uniquely moving. It’s a tribute to Scalia as an interlocutor, a fellow opera lover — including a reference to the opera Scalia/Ginsburg: A (Gentle) Parody of Operatic Proportions, which debuted in 2015 — and a “best buddy.”

Toward the end of the opera Scalia/Ginsburg, tenor Scalia and soprano Ginsburg sing a duet: ‘We are different, we are one,’ different in our interpretation of written texts, one in our reverence for the Constitution and the institution we serve. From our years together at the D.C. Circuit, we were best buddies. We disagreed now and then, but when I wrote for the Court and received a Scalia dissent, the opinion ultimately released was notably better than my initial circulation. Justice Scalia nailed all the weak spots—the ‘applesauce’ and ‘argle bargle’—and gave me just what I needed to strengthen the majority opinion. He was a jurist of captivating brilliance and wit, with a rare talent to make even the most sober judge laugh. The press referred to his ‘energetic fervor,’ ‘astringent intellect,’ ‘peppery prose,’ ‘acumen,’ and ‘affability,’ all apt descriptions. He was eminently quotable, his pungent opinions so clearly stated that his words never slipped from the reader’s grasp.

Justice Scalia once described as the peak of his days on the bench an evening at the Opera Ball when he joined two Washington National Opera tenors at the piano for a medley of songs. He called it the famous Three Tenors performance. He was, indeed, a magnificent performer. It was my great good fortune to have known him as working colleague and treasured friend.

So my fantasy is imagining Justices Ginsburg, Sotomayor, and Kagan joined by a Justice Amy Klobuchar.  What a quartet that would be!

U.S. Sen. Amy Klobuchar is likely to mix it up in the coming political brawl in Washington around replacing Supreme Court Justice Antonin Scalia, and not just because her own name has again surfaced as a potential high court nominee. 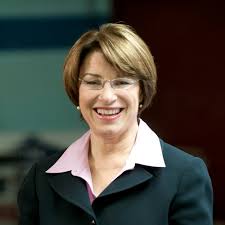 Klobuchar sits on the Senate Judiciary Committee.  This can be a plus because she has worked with all the Republican members.

Obama said late Saturday that he intends to try to fill the vacancy “in due time.” It is already shaping up to be an epic battle as Obama has been handed the rare chance to swing the ideological balance of the court, where Scalia served as one of the most reliably conservative voices in the 5-4 majority.

As Republicans who control the U.S. Senate vow to block Obama, the president will look for judiciary committee allies like Klobuchar and Franken. But Klobuchar, an attorney and a former elected prosecutor, may first be considered as a prospect.

Ornstein said by choosing a U.S. senator, Obama could make it a harder for Senate Republicans to block a trusted colleague for the entirety of 2016. And he suggested it might be a good time to reverse the recent presidential trend of only picking judges.

“There was a long tradition of selecting people who had been in public life, gone through elections and served in legislatures or executive office,” Ornstein said.

Chief Justice Earl Warren and retired Justice Sandra Day O’Conner are two examples cited.
President Obama may ultimately decide that Klobuchar is too political an appointment and we don’t know if she would even be interested, but I can dream of the Mighty Four on the Supreme Court.
Photograph:  Twitter.com

Justice Antonin Scalia has made it clear that he is, at best, uncomfortable with the series of decisions made by the Supreme Court on gay rights.  Soon after the decisions last June on DOMA and Prop 8,  Asawin Suebaeug wrote an article for Mother Jones in which the best and worst parts of his dissents were highlighted.

Justice Antonin Scalia is not a big fan of gay sex, gay marriage, or gay anything. His dissent to Wednesday’s decision on United States v. Windsor, in which the Supreme Court ruled, 5-4, that legally married same-sex couples should get the same federal benefits as straight ones, shows as much. (The high court’s ruling invalidates a provision of the Defense of Marriage Act that barred same-sex couples from receiving health, tax, and retirement benefits.) In a nutshell, Scalia’s dissent focuses on the court’s prime purpose and power, and he is aghast that the majority assumed the power to shoot down DOMA. (To read the seven worst things Scalia has said or written about homosexuality, click here.)

And Andy Borowitz has made a cottage industry out of zinging him including “Scalia Arrested Trying to Burn Down the Supreme Court”.

Justice Scalia, who had seemed calm and composed during the announcement of two major rulings this morning, was spotted by police minutes later outside the building, carrying a book of matches and a gallon of kerosene.

Back at the Supreme Court, Justice Scalia’s colleagues said they hoped he would get the help he needed, except for Justice Clarence Thomas, who said nothing.

Meanwhile  Justice Ruth Bader Ginsburg celebrated the marriage of a long time friend to another man while Justice Anthony Kennedy who wrote the decision on DOMA is being celebrated himself.

Justice Kennedy was a guest at an event in San Francisco featuring the Gay Men’s Chorus and speeches thanking him for his DOMA decision as well as his two previous decisions expanding gay rights.  The New York Times reported

The San Francisco Gay Men’s Chorus sang “Give ’Em Hope” for a revered and in some ways surprising guest who shared a California stage with them last month: Justice Anthony M. Kennedy.

Justice Kennedy was in San Francisco for an American Bar Association meeting, but he was also there to be celebrated by the men on the risers behind him. In remarks from the stage, San Francisco’s mayor, Edwin M. Lee, thanked the justice “for upholding the Constitution and justice for all” in his majority opinion in June in United States v. Windsor, a major gay rights victory.

“Freedom is always a work in progress,” Justice Kennedy said in his own remarks, making clear that there was more work to be done. 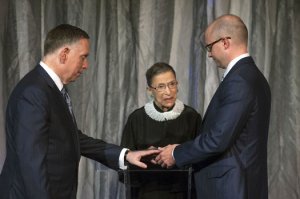 justice Ginsburg became the first Supreme to officiate at a gay wedding.

“Michael Kaiser is a friend and someone I much admire,” Ginsburg said in a written statement Friday. “That is why I am officiating at his wedding.”

“I think it will be one more statement that people who love each other and want to live together should be able to enjoy the blessings and the strife in the marriage relationship,” Ginsburg told The Washington Post in an interview.

“It won’t be long before there will be another” performed by a justice. She has another ceremony planned for September.

Kaiser told The Associated Press that he asked Ginsburg to officiate because she is a longtime friend.

So at least two, and if we take Justice Ginsburg at her word, three Supreme Court Justices moving forward with the times.

Has anyone else noted that one of those getting married was John Roberts?  Wonder what the Chief Justice thinks about that?
Photograph:  Margo Schulman/Kennedy Center

This Brian McFadden cartoon seemed appropriate for posting as people are Marching on Washington for Jobs and Freedom once again. 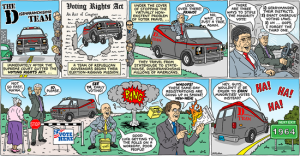 Justice Ruth Bader Ginsberg has it right in her dissent from the recent decision:  Why would we want to do away with something that is working?