William Henry Harrison, the ninth president of the United States, served one month.  I learned in school that he gave a very long inaugural address, caught pneumonia, and died.  I think this is what most people know about him.  Oh, there is that slogan “Tippecanoe, and Tyler, too”.  Harrison , while governor of the Indiana Territory, commanded troops that repulsed a raid by Chief Tecumseh.  According to his biography on the White House website

…In 1801 he became Governor of the Indiana Territory, serving 12 years.

His prime task as governor was to obtain title to Indian lands so settlers could press forward into the wilderness. When the Indians retaliated, Harrison was responsible for defending the settlements.

The threat against settlers became serious in 1809. An eloquent and energetic chieftain, Tecumseh, with his religious brother, the Prophet, began to strengthen an Indian confederation to prevent further encroachment. In 1811 Harrison received permission to attack the confederacy.

While Tecumseh was away seeking more allies, Harrison led about a thousand men toward the Prophet’s town. Suddenly, before dawn on November 7, the Indians attacked his camp on Tippecanoe River. After heavy fighting, Harrison repulsed them, but suffered 190 dead and wounded.

The Battle of Tippecanoe, upon which Harrison’s fame was to rest, disrupted Tecumseh’s confederacy but failed to diminish Indian raids. By the spring of 1812, they were again terrorizing the frontier.

In the War of 1812 Harrison won more military laurels when he was given the command of the Army in the Northwest with the rank of brigadier general. At the Battle of the Thames, north of Lake Erie, on October 5, 1813, he defeated the combined British and Indian forces, and killed Tecumseh. The Indians scattered, never again to offer serious resistance in what was then called the Northwest.

Then in 1840 he won the Presidency in a close election, gave his address, took sick and died.  But of what did he actually die?  Two New York Times science reporters think they have found the answer.

But a new look at the evidence through the lens of modern epidemiology makes it far more likely that the real killer lurked elsewhere — in a fetid marsh not far from the White House.

The first clue that the pneumonia diagnosis was wrong lies in Miller’s [Thomas Miller, Harrison’s doctor] own apparent uneasiness with it. “The disease,” he wrote, “was not viewed as a case of pure pneumonia; but as this was the most palpable affection, the term pneumonia afforded a succinct and intelligible answer to the innumerable questions as to the nature of the attack.” 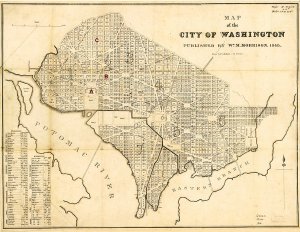 An 1846 map of Washington, top, shows the home (A) of William Henry Harrison, above, its water supply (B), and a field of “night soil” (C) that could have harbored deadly bacteria.

In those days the nation’s capital had no sewer system. Until 1850, some sewage simply flowed onto public grounds a short distance from the White House, where it stagnated and formed a marsh; the White House water supply was just seven blocks downstream of a depository for “night soil,” hauled there each day at government expense.

That field of human excrement would have been a breeding ground for two deadly bacteria, Salmonella typhi and S. paratyphi, the causes of typhoid and paratyphoid fever — also known as enteric fever, for their devastating effect on the gastrointestinal system.

Two other antebellum presidents, James K. Polk and Zachary Taylor, developed severe gastroenteritis while living in the White House. Taylor died, while Polk recovered, only to be killed by what is thought to have been cholera a mere three months after leaving office.

Thus, the lack of a sewer system may have lead to the death of two presidents and the illness of a third.