I’ve been spending considerable time this summer on our upstairs screened in porch watching the birds fly by (it must overlook some kind of bird flyway), the sky, and the squirrels dancing on the wires.  And reading.

In my reading life, I have always interspersed serious non-fiction and non-mystery fiction with lots of mysteries.  I’ve written in the past about some of my old favorites:  P. D. James, Dorothy L. Sayers, and Ngaio Marsh.  I began reading them in high school introduced by my mother who was also a prolific mystery reader.  But yesterday I was looking back at what I had been reading and re-reading this summer and it seems to be mostly three very different writers.

I had read the first two books in Archer Mayor/Joe Gunther series many years ago when they first were published.  I think my Vermont brother-in-law gave one to my mother who passed it on to me.  Fast forward.  I moved to Vermont a year ago and the local author, Archer Mayor, was just publishing Proof Positive.  I rushed down to the wonderful local bookstore, Mystery on Main, and purchased a signed copy.  I read it and loved it.  Now I was on a mission, one which has gone on into this summer, to read all the rest in the series before Mayor writes another.  I am probably not going to make it as it has a September release.  Six to go and I not only have to read them, but also find copies. 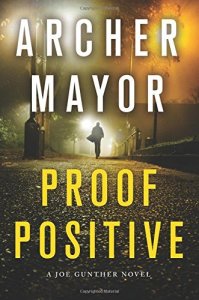 For anyone who hasn’t read Mayor, he writes about a Vermont police officer from my new hometown, Brattleboro.  At some point Joe Gunther stopped being a local Bratt cop and joined a made-up state investigative bureau.  The owner of Mystery on Main, some of the other members of the book group I just joined, and I were speculating that he had to go statewide because there just aren’t that many people murdered around here.  I have to confess that I find the books a bit uneven, but the best ones (The Skeleton’s Knee, Occam’s Razor, and Proof Positive) are excellent and even the ones I enjoyed the least (The Dark Root and The Disposable Man) are very good.  He evokes Vermont landscape and politics. One murder took place across the street from me.  I enjoy driving around town and locating scenes of the crimes.  Good reads.  I would call them a Vermont version of a hardboiled police procedural.

At the opposite end of the spectrum are the English novels of Robert Barnard featuring Charlie Peace.  I’ve read a couple of Barnard’s over the years including the very funny Political Suicide, but until I found The Chaste Apprentice unread on my bookshelf, I hadn’t realized that he had a written series featuring a black police inspector.  The plots are entertaining as Barnard generally is, but the discussion of how being black in the Leeds, England area and the effect on detection show how stereotyping are not just American.  I’ve only read three and a half books in the series and not in order as I’m reading them as I find them in the library, but in one of the later books, A Charitable Body, Peace is married to a white woman and they have two children.  Felicity (I haven’t finished the book yet) seems to be critical in solving the mystery.  Barnard is expert at taking ordinary situations like a summer festival and inserting not only a mystery, but poking fun at his characters and settings. 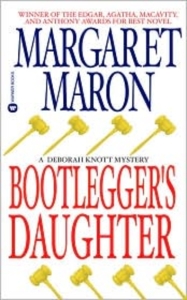 The third group of books I’ve been reading this summer are the Margaret Maron/Deborah Knott books.  Maron’s books evoke North Carolina in the same way Mayor evokes Vermont and Barnard, England.  But Joe Gunther is basically a loner with a small team and a few friends while Deborah Knott has 11 older brothers with all of the wives and children to say nothing of aunts, uncles and cousins surrounding her.  Knott is a district court judge who over the course of 19 books has been involved in a great many of the murders in Maron’s imaginary Colleton County (somewhere near Raleigh/Durham).  They aren’t quite “cozy” but they are very family centered.  Maron’s twentieth Deborah Knott book will be published tomorrow.  She has announced she expects it to be the last in the series, but like the rest of her fans I hope she will change her mind at some point down the road.

I’ve read all 19 of the Deborah Knott books before so this summer I was re-reading a few of them partly in anticipation of the new release but also because the church burnings that followed the murders in Charleston, SC reminded of me Home Fires.  Home Fires centers around the burning of three black churches and the discovery of a body which is identified as a young black organizer who had gone missing years prior.  It is about race relations in North Carolina between whites and blacks as well as the hierarchy of color between African-Americans themselves.  It is a very different take on race and racial attitudes that Deborah confronts than the one facing Charlie Peace.  I’ll have think about this and explore it further.

But for now, I’m enjoying being variously in England, North Carolina, and home in Vermont confronting crime from a distance.