President Obama met with the Republicans in the House yesterday.  I think Politico had the best take on the meeting.

After years of pining for more face time with the president, House Republicans  found out Wednesday that Barack Obama looks and sounds the same behind closed  doors as he does on TV. 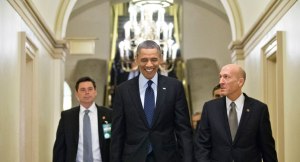 I think they are finally learning what many of us have known for a while:  what you see is what you get with Barack Obama.  Michelle has been trying to tell everyone this for years.  So he has his line and the Republicans led by Paul Ryan have theirs.  But where does that leave the rest of  us?  How to deal in a meaningful way with the sequester and the budget?  I see two paths:  One, those affected by the cuts start putting on the pressure and two, we begin looking at alternatives to either the Republican or White House budget proposals.

On the first, the lobbying has begun.  The New York Times reports

Construction companies are lobbying the government to spare their projects from across-the-board cuts. Drug companies are pleading with the White House to use all the fees they pay to speed the approval of new medicines.

And supporters of Israel have begun a campaign to make sure the Jewish state receives the full amount of military assistance promised by the United States.

A frenzy of lobbying has been touched off by President Obama’s order to slice spending this year by $85 billion, divided equally between military and civilian programs. The cuts have created new alliances and strange bedfellows.

Hunter R. Rawlings III, a historian of ancient Greece who is the president of the Association of American Universities, joined Wesley G. Bush, the chief executive of Northrop Grumman, the maker of surveillance drones and B-2 bombers, in a news conference in which they denounced the automatic cuts known as sequestration.

Health care and education groups, advocates for poor people, and state and local officials who fought in the past for bigger budgets are now trying to minimize the pain.

How much money do you think will be spent on lobbying?  I don’t even want to begin to add it up.  What a waste of money.  But I guess some people will still have jobs.

For an alternate budget we can look at the Congressional Progressive Caucus budget proposal.    The Economic Policy Institute assisted in putting the budget together and scoring it.  Dean Baker from the Center for Economic and Policy Research calls it “A Serious Budget That the Serious People Won’t Take Seriously”.  The Progressive Caucus has been proposing budgets for a number of years now and takes the position that if their proposals had been adopted, we wouldn’t be in the mess we are in now.

So what exactly are they proposing?

Calls for the adoption of the “Buffett Rule”

Creates a publicly funded federal election system that gets corporate money out of politics for good.

Invests in our children’s education by increasing Education, Training, and Social Services

It would also end the war in Afghanistan and do selective, not blanket cuts to the military budget.  It basically spends money to put people back to work and stabilize the economy.  This assumes that people who work pay taxes and put money back into the economy.  It also achieves deficit reduction.  All through government spending.  As Dean Baker poinst out

For those upset that the budget debate is getting ever further removed from the real world problems of an economy that is suffering from a deficit of 9 million jobs, there is good news. The Congressional Progressive Caucus (CPC) has produced a budget that is intended to make the unemployment situation better rather than worse.

The story of course is that we are still in a situation where we need the government as a source of demand in the economy. This is independent of how much we like the government or the private sector. The private sector does not expand and create jobs just because governments want it to, as is being discovered now by leaders in the United Kingdom, Greece, Italy, Spain and everywhere else where deficit reduction is now in vogue. In the current economic situation, loss of demand from the government is a loss of demand to the economy. That is why recent steps to reduce the deficit, such as the ending of the payroll tax cut (which put money in consumers’ pockets) and the sequester, will lead to slower growth and higher unemployment.

Would this happen with the adoption of the progressive budget?  I don’t know, but I know that what is going on now isn’t working either.  And what is worse, people are tuning out and shrugging their shoulders assuming nothing can be done.

Gail Collins has this fantasy.

White smoke poured from the Capitol today and crowds of onlookers broke into shouts of jubilation, crying: “We have a budget!”

Inside, where the nation’s legislators had been walled off in seclusion, the newly chosen tax-and-spending plan was garbed in the traditional brass staples for its first public appearance. Insiders said it planned to take the name of Budget for Fiscal Year 2014.

I guess that is alternative number three.  Maybe we should try sequestering Congress.

In case you are wondering what it is, the New York Times has published a summary.  It is really a budget and deficit reduction plan and not something to raise the debt ceiling which still has to be done.  And time is running out.

A couple of interesting comments about the plan on Politico’s Arena.

The one real piece missing from this entire conversation? The piece that would make the numbers work and dramatically reduce the pain?

Comprehensive immigration reform. That’s right. There’s only one pool of 15 million people begging to be able to pay more into the system, and this country has spent the last several years fighting to make sure they can’t.

We need to get over our xenophobia, give them a path to citizenship, and let them start paying in to the system at regular rates in regular intervals. The nation’s immigrant population tilts much younger than the native-born population and is predominantly in the workforce, and would reverse the trend of a rising retiree-to-worker ratio, thereby shoring up both major entitlement programs

The immigrants would pay taxes, pay into social security, and Medicare.

While the spending cuts for programs that working people desperately depend upon are enforced by specific spending caps, there is no such enforcement or clarity regarding the $1.1 trillion to be raised in revenue over 10 years.

What happens if that revenue target is not reached? There is no language that deals with that. Where does the revenue come from? That very important issue is kicked to the tax writing committees with no guarantee that hundreds of billions of dollars in new revenue will not come from the pockets of low- and moderate-income Americans. While nobody knows for certain what provisions might be adopted, there is reason to expect that some of the areas that the House and Senate will be looking at include the home mortgage deduction for middle-class families, taxes on health care benefits, and increased taxes on retirement programs such as 401(k)s and IRAs. In other words, while there is a reasonable degree of specificity in terms of cuts there is only vagueness in terms of revenue.

But Dean Baker from the Center for Economic and Policy Research asks the questions I’ve been wondering about:  What is wrong with the deficit at a time when we have no jobs and isn’t there a solution besides massive budget cutting?

The arithmetic is clear as day. The United States does not now, nor will it in the near future, face a serious problem meeting its debt obligations. It had a debt to GDP ratio of 116 percent after World War II. The baseline projections have it getting to 90 percent by 2021. 116 percent is much larger than 90 percent. (The difference will be more than $5 trillion in 2021.) This should be understandable even to a 6-figure Washington policy wonk or budget reporter.

Other countries had and have much higher ratios of debt to GDP and still face no problem paying their bills. In Japan, the ratio of debt to GDP is more than 220 percent, yet private investors are willing to lend the country money long-term at interest rates of less than 1.5 percent. Of course investors are also willing to put their money on the line in the U.S., lending us money long-term at interest rates close to 3.0 percent. So the people who actually have money on the line are saying as clearly as they can that the debt is not a serious problem.

Furthermore, there are many ways to deal with the debt that do not require attacking ordinary workers, who have been the victims of Wall Street greed and economic mismanagement by the deficit hawks. (People like Kent Conrad held positions of responsibility in the years of the build-up of the housing bubble, but were so utterly incompetent they either did not see it or recognize its danger.)

We could just have the Fed hold $3 trillion in government debt indefinitely. It would then refund more than $1 trillion in interest payments to the Treasury over the next decade. The inflationary impact of the additional reserves could be offset by raising bank reserve requirements. What could be more simple and costless than this mechanism? But the Gang of Six would rather cut Social Security and Medicare.

We could follow the example of England and impose a financial speculation on trades of stock, futures, options, credit default swaps and other financial instruments. This could raise more than $1. 5 trillion over the next decade. But the Gang of Six would rather cut Social Security and Medicare.

It is my understanding that we didn’t have a debt ceiling until World War I and that no many countries have one so why not do away with our?  Politico had this piece about that from Moody’s a few weeks ago.

The United States should do away with the debt ceiling altogether to bring greater certainty to investors in U.S. Treasury bonds, Moody’s suggested Monday.

With the August 2 deadline for raising the debt ceiling barely more than two weeks away, the bond-rating agency issued a report Monday noting that the U.S. is one of just a few countries that has a statutory borrowing limit and saying that the limit creates “periodic uncertainty” for investors, Reuters reported.

Rather than continuing to use the debt ceiling in an effort to keep U.S. borrowing down, the government should look toward Chile, Moody’s suggested. There, “the level of deficits is constrained by a ‘fiscal rule,’ which means the rise in debt is constrained though not technically limited.” Chile is considered to be Latin America’s most fiscally sound country.

And, the report noted, it’s not like the debt ceiling has been effective in keeping U.S. debt down: Congress has in the past raised it often and has not linked it to spending levels.

So the bottom line is that the Gang of Six plan may be a place to start talking budget and deficit reduction, but we should do something about the debt ceiling first – like abolish it.