Unless you’ve been in a coma or cave or maybe sequestered somewhere you’ve heard about the traffic problems on the George Washington Bridge last September.  Everyone is investigating:  A joint special committee of the New Jersey legislature, the United States Attorney for New Jersey, at least two Congressional Committees and a great many news investigative reporters.  But until subpoenas come due in a week or so and people have a chance to digest all the material that will be submitted, including listening to cell phone conversations and searching for text messages and email, there is likely to be no new information.  So in case you are suffering from bridgegate withdrawal, here is some information on traffic studies.

Trust Calvin Trillin to be on the case.  First, his poem as published in the Nation.

Chris Christie insists he knew nothing at all
Re jams at the bridge lanes. Well, maybe.
But, now, those commuters are smiling. They say,
“So who’s in a bigger jam, baby?”

And then we have his imaginary consultant’s report from the traffic study published in the New York Times Sunday Review.

FINAL REPORT OF A TRAFFIC STUDY CONDUCTED AT THE FORT LEE, N.J., APPROACH TO THE GEORGE WASHINGTON BRIDGE, SEPT. 9-12, 2013

¶ Object of the study. The study was designed to ascertain the effect on traffic if two out of three tollbooths at the Fort Lee, N.J., approach to the George Washington Bridge were closed.

¶ Study designer. The traffic study was designed by Duane C. Milledge, Ph.D. Dr. Milledge was most recently the designer of a traffic study submitted to the agency that operates the two bridges that cross the Missouri River near downtown Kansas City, Mo. The design for that study calls for furnishing commuters on one bridge with $20 bills and instructions to say to the toll taker, “Sorry, it’s the smallest I’ve got,” collecting no tolls on the other bridge, and observing the result. Dr. Milledge is a member of the American Association of Traffic Engineers, a contributor to Queue Quarterly, and a Republican precinct captain in Summit, N.J.

¶ Hypotheses. The principal hypothesis of the study was that the tollbooth closings might ease traffic flow onto the bridge, due to fewer cars from Fort Lee being able to gain bridge access.

¶ Additional benefits that might accrue if the two tollbooths were closed permanently. It was posited that the space occupied by the two tollbooths in question might more efficaciously serve the revenue-flow needs of the Port Authority of New York and New Jersey through a use other than collecting tolls — for instance, concessioning them out as a Shake Shack or a retail outlet for selling such souvenirs as George Washington Bridge coffee mugs, Springsteen memorabilia and CDs of Don Imus drive-time radio shows from the ’80s.

¶ Methodology. The methodology of the study was to shut down two out of three tollbooths and see what happened.

¶ Interaction of researchers and commuters. The research team had no problem collecting data from individual drivers waiting to go through the one open lane, since their cars were virtually stationary. There were only 14 instances of violence directed at the survey takers, almost all of which consisted of commuters throwing coffee from travel mugs or paper cups. Fortunately, no researcher was scalded, since the drivers had been waiting so long that their coffee was cold.

…Corporal Sicola [research assistant]  found that 58 percent of the motorists in line shouted some imprecation, ranging from the sort often heard in the stress of a rush-hour subway or an overcrowded emergency room (e.g., “You people should burn in hell” or “You can take your study and stick it where the sun don’t shine”) to rare curses, presumably ethnic in origin (e.g., “May streetcars grow on the back of your throat”).

As we all know the lane closures were ended on Day 4, so a follow-up study is recommended.

Now, here is advice from Dr. Gridlock of the Washington Post on how to do an actual traffic study.

For close to three millennia— from the days of the Romans until the interstates were built — conducting a traffic study was simple, dreary work: send somebody out with a clip board to count ox carts or stage coaches or automobiles.

Did this create traffic jams on the Appian Way or Oregon Trail? Probably not.

Like everybody else who drives, Christie knows about traffic cameras. New Jersey has almost as many of them as it does cranberries,  and they outnumber the pigeons on the suddenly-controversial approaches to the George Washington Bridge.

Back in the days before he acquired a chauffeur Christie had to listen to the same radio traffic reports as the plebeians. As an observant fellow, he’s bound to have noticed that in the past decade they’ve gotten much more sophisticated.

Those cameras have helped, but a major advance has been because a company called Inrix and a few competitors take the heartbeat of traffic and supply local radio and TV stations with what they report. Inrix has a world-wide network of transponders installed in most trucks and what are called “fleet vehicles” — rental cars and delivery vans.

Those transponders provide real-time information, so your cheerful traffic reporter can tell you exactly how much traffic to expect — or where the major tie ups are — on, for example, the George Washington Bridge.

And then you can take the data collected and do some computer modeling.  Bill Baroni who was the one who tried to explain the fake alleged traffic study would have had some really nice charts to show them.  You don’t need poor Corporal Sicola!

Illustration by Peter Arkle for the New York Times

Unfortunately for the Governor, it seems all too easy to make fun of him and to imagine life if he were to become President.

Lots of news these days on the gay marriage front almost all of it good.  Washington State has joined Massachusetts, Vermont, New Hampshire, New York, Connecticut, and Iowa (plus Washington, D.C.) in legalizing gay marriage.  Maryland and New Jersey are moving closer and the Appeals Court upheld the California ruling on Prop 8.  And polls now show that most Americans support the equal right of gays and lesbians to marry.  The tide has turned and the wave of gay marriage is coming in quickly now. 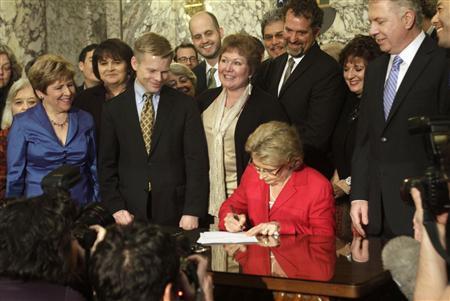 On the day before Valentine’s Day, Washington Governor, Christine Gregoire signed the bill legalizing gay marriage in that state.  It will take effect in 90 days.  According to the Reuters story

Gregoire, a Democrat and a Roman Catholic, signed the measure to raucous applause during a ceremony in the ornate reception room of the Olympia statehouse, declaring, “This is a very proud moment. … I’m proud of who and what we are as a state.” It was the latest victory for the U.S. gay rights movement.

Anticipating the repeal campaign that lies ahead later this year, the governor added, “I ask all Washingtonians to look into your hearts and ask yourselves – isn’t it time? … We in this state stand proud for equality.”

Democrats, who control both legislative bodies in Olympia, accounted for the lion’s share of support for the measure. The stage for swift passage was set after Gregoire, who is in her last term of office, said last month she would endorse the law.

Several prominent Washington-based companies employing tens of thousands of workers in the state have supported the bill, including Microsoft, Amazon and Starbucks.

Opponents were led by Roman Catholic bishops and other religious conservatives.

A joint panel of the Maryland legislature approved on Valentines’s Day a bill to legalize same-sex marriage, adding to national momentum for gay nuptials following advances in California, New Jersey and Washington state over the last week.

The House of Delegates’ Judiciary Committee and the Health and Government Operations Committee approved the measure 25-18 in a joint vote, a judiciary panel spokeswoman said. The measure is expected to go to the full House on Wednesday, she said.

Interestingly the opposition in the Maryland legislature – and in the state –  is coming from African Americans.  Rev. Al Sharpton is lobbying black ministers to support the bill.  Anyone who wants to characterize the black community as monolithic is mistaken as when the Massachusetts bill passed some of the most passionate supporters were African American legislators like Dianne Wilkerson.

New Jersey is, unlike Washington and Maryland, facing opposition from Governor Chris Christie who believes that civil rights issues should be referendum issues.  The New York Times reported

The New Jersey State Senate voted on Monday to legalize same-sex marriage, a significant shift in support from two years ago, when a similar measure failed.

The legislation faces a vote on Thursday in the State Assembly, but even if that chamber passes the measure, as expected, Gov. Chris Christie, who favors holding a referendum on the issue, has said he will veto it.

But advocates hailed the Senate vote as a huge advance, noting that they won 10 more votes than they did two years ago. And both supporters and opponents said they were surprised by the margin: the bill needed 21 votes to succeed and passed 24 to 16.

“The margin brought the notion of an override out of fantasyland,” said Steven Goldstein, chairman of Garden State Equality, a gay rights group. “Before today, I would have said the chances of an override were one in a million. Now I’d say it’s about one in two.”

Mr. Christie, a Republican, has said the issue should be put on the ballot in November as a constitutional amendment. Some polls have found that a slight majority of New Jersey voters support same-sex marriage. Advocates note, however, that in 31 states where same-sex marriage has been put to a referendum, it has failed.

On Monday, Mr. Sweeney [Senate President] said there was “not a chance in hell” that he would support the legislation required to put the question to a ballot, which he said would mean allowing “millions of dollars to come into this state to override a civil right.”

Watch to see if Rick Santorum makes gay marriage repeal an issue if he gets the nomination.  Likewise Mitt Romney.  The Republicans are, I think, swimming against the tide.