So, we have made it though the Republican Convention.  Donald Trump is the nominee and even though people keep expecting him to “pivot toward the general”, I think he won’t/can’t change.  My politically conservative brother-in-law did make an astute observation the other day.  He basically said that the left feared Trump and the right feared Hillary which makes this the election based on fear.  Here’s hoping that the Democrats give us some positive reasons to vote for them.

In fact, I found this meme on Facebook posted by a friend of a friend, Louise Aucott.  I gather she is a Bernie supporter.

I really don’t understand the Republican Governors who talked about how well their states were doing, while The Donald was saying that the country had no economy.  Do they want to go back to 2008?  They really need to credit President Obama because their state economies didn’t get better in a vacuum.

Another thing I don’t understand is why all of the Trump/Pence supporters don’t give up Social Security, Medicare, Food Stamps (because I’m sure many are getting assistance), disaster aid (which Republican governors are quick to ask for) and give back any raises they might receive as the result of an increase in the minimum wage.  If they hate the government so much, they should forgo the benefits that come from it.

Back to what I started this post to do:  Let’s look at the Republican Convention.  I’ve been to a national convention (1972) and I know just how chaotic they can be when there is dissent among the ranks.  I think we debated everything from the rules to many platform planks and managed to cause George McGovern to give his acceptance speech in the wee hours.  But that was back in the hay day of participatory democracy.  There is no such excuse for the mistakes made by the Trump campaign beginning with poor Melania’s speech which no one vetted.  I can understand why she was so taken with Michelle Obama’s words.  Melania is not a politician and may not have realized that she was quoting the enemy, but someone from the campaign should have known.  And then allowing Senator Ted Cruz to speak just before the Vice-Presidential acceptance speech was another management failure.

The New York Times summed up the convention this way

Mr. Trump and his fellow speakers over four days and nights did not pivot, did not shift, did not seek the notional sweet center of American public life. With few exceptions, the convention was aimed at stirring up true believers and wedding them to his cause. The emotional and cultural core of Mr. Trump’s campaign — reversal of, and even revenge for, perceived slights, disrespect and loss — were undisturbed and at times amplified before a prime-time audience. In Mr. Trump’s telling, the most powerful nation in the history of the world was a victim. And Mr. Trump was its avenger. 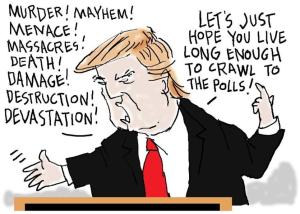 2 thoughts on “The Republican Convention 2016”