This week has brought notice of the death of two political figures from the past:  Lindy Boggs and Harry Byrd, Jr.  Both in their late 90s and had been out of office and out of the news for a number of years.  But it is notable that although of similar age and from the south, they were opposites when it came to civil rights.

Lindy Boggs was the window of House Speaker Hale Boggs who died in a plane crash in Alaska.  I remember when this happened in 1972,  I was moving out of my student movement phase and beginning to take an interest in electoral politics. Boggs ran to replace him following a tradition of widows taking over for their politician husbands.   Boggs, however, was different.  She went on to serve nine terms in Congress (several of them representing a majority black district) and become a champion of women’s rights and civil rights while representing Louisiana.  The New York Times describes some of her legislative efforts.

Mrs. Boggs during her Congressional campaign in 1973

The velvet Southern charm she had absorbed growing up on two Louisiana plantations was her not-so-secret weapon.

She displayed it early in her first term when the House banking committee was composing an amendment to a lending bill banning discrimination on the basis of race, age or veteran status. She added the words “sex or marital status,” ran to a copying machine and made a copy for each member.

In her memoir she recalled saying: “Knowing the members composing this committee as well as I do, I’m sure it was just an oversight that we didn’t have ‘sex’ or ‘marital status’ included. I’ve taken care of that, and I trust it meets with the committee’s approval.”

Thus was sex discrimination prohibited by the Equal Credit Opportunity Act of 1974.

I always loved that story.

Mrs. Boggs used her membership on the Appropriations Committee to push for other women’s economic concerns, like equal pay for government jobs and equal access to government business contracts. She became a champion of historic preservation and port development, flood control and housing in her New Orleans district.

Mrs. Boggs championed racial justice at a time when doing so invited the resentment if not hostility of most Southern whites. She saw the growing civil rights movement as necessary to the political reform movement of the 1940s and ’50s.

“You couldn’t want to reverse the injustices of the political system and not include the blacks and the poor; it was just obvious,” she said in 1990.

While her husband was in office, she supported civil rights legislation as well as Head Start and antipoverty programs. As the president of two organizations of Congressional wives, she saw to it that each group was racially integrated.

She has been honored by the House with the naming, in 1991, of the Lindy Claiborne Boggs Congressional Women’s Reading Room.  She was 97 when she died.

At the other end of the civil rights spectrum is Harry Byrd, Jr., the long time Senator from Virginia, and not to be confused with Robert Byrd of West Virginia.  When I moved to Virginia in 1965, Byrd was my Senator.  He had just been appointed to replace his father who had died.  The Byrd Machine ruled Virginia Democratic State politics at the time and both Byrds worked hard to maintain segregation in Virginia schools.  The New York Times writes

Even as a middle-aged man, Mr. Byrd was often called “Little Harry” or “Young Harry.” By the 1920s, his father, Harry F. Byrd Sr., had built a formidable Democratic political machine in Virginia that eventually elected him governor and then to the Senate, where he served from 1933 until his resignation in 1965. (Like his son, Harry Sr. was initially appointed to the Senate to fill a vacancy, after the resignation of Claude A. Swanson.)

The elder Mr. Byrd was a conservative Democrat who served for 11 years as chairman of the Senate Finance Committee. He also supported “massive resistance,” the name given to Virginia’s opposition to public school desegregation in the late 1950s. The son, who was serving in the State Senate at the time, helped develop the policy, which included closing some schools for several years rather than integrate them. 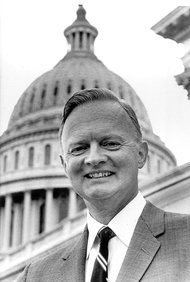 Harry F. Byrd in 1965, when he was appointed to his father’s seat

Moorestown, N.J. where I was living as a teenager was one of the northern towns that hosted African-American high school seniors so they would have a chance to get diplomas and go to college.  I went to a number of social activities that were hosted for them, but never, much to my regret, got to know any of them well enough to stay in touch.

Although the Byrd machine began coming apart amid the fractured politics of the 1960s, it held together long enough to get Gov. Albertis S. Harrison Jr., a longtime supporter of the family, to appoint Harry Jr. to his father’s seat in 1965. The following year Mr. Byrd won a special election to complete his father’s term. By 1970, with blacks voting in larger numbers and urban labor unions supporting more liberal candidates, Mr. Byrd faced a potentially challenging Democratic primary in pursuit of his first full term. That March, saying he was unwilling to sign a party oath to support the Democratic nominee in the 1972 presidential election, particularly since the candidate was not yet known, he announced that he would become an independent.

If the decision seemed striking given his family history, it was also prudent. Taking votes from his Democratic and Republican opponents, he won easily that November. Mr. Byrd had dropped his party affiliation but essentially kept his voters, his politics and much of his power.

I don’t think he could have supported either George McGovern or Hubert Humphrey so he made the correct choice.  Byrd, however,  continued to caucus with the Democrats.  There is one more shameful incident I remember.

In the late 1970s, President Jimmy Carter asked Mr. Byrd to form judicial commissions to name black and female candidates for Virginia’s federal courts. In 1980, after Mr. Byrd’s commissions had named only white men, none of whom were judges, President Carter nominated James E. Sheffield, a black state court judge. Mr. Byrd vowed to fight his Senate confirmation and did so successfully.

I remember Judge Sheffield’s rejection well.  The only reason for his failure to be confirmed was race.

Senator Byrd was a bigot throughout his public life.  He did not run for re-election in 1982 by which time I think he would have lost as new young Democrats were winning office like Charles Robb who became governor in then.  And people like me who were taking over the Virginia Democratic Party.  Byrd’s time was thankfully passing.