The President, probably never believing that Assad would use chemical weapons, drew a red line.  He’s been stalling around saying he needs verification, but now he has it.  The question is what should we do now.  I think Obama is stuck. 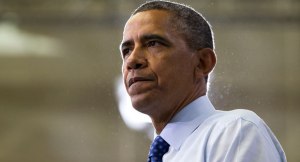 The United States has a long history of failed interventions.  Vietnam was basically a civil war.  We armed the Taliban when they were our “friends”.  We actually started a civil war in Iraq by stupidly dismissing all the Baathists saying they can’t be part of any new Iraqi government.  Now we are again taking sides against the Baathist who currently rule Syria.  My big fear is that the region will explode into a Sunni v. Shia conflict and we will be seen as taking sides.

My strong view, vented last night as I absorbed this stunning collapse of nerve, is that we shouldn’t fight at all. We are damn lucky to have gotten every GI out of Iraq, and the notion of being sucked back into that region again – and to join sides in a sectarian conflict – is a betrayal of everything this president has said and stood for. It’s a slap in the face for everyone who backed him because he said he wouldn’t be another Bush or McCain or Clinton. If he intervenes in Syria, he will have no credibility left with those of us who have supported his largely sane and prudent foreign policy so far. Libya was bad enough – and look at the consequences. But Syria? And the entire Middle East? Is he out of his mind?

And can you think of a dumber war than this one?

The man who said he would never engage in a dumb war is apparently preparing to join the dumbest war since … well, Iraq.

My only hope right now is that we can somehow use our threat of intervention to maneuver some type of international peace keeping force while we try to bring both sides to a negotiating table.  And let us hope that President Obama knows to get Congress involved, gets a UN resolution and the Arab League to agree before we take any action.

One reason I supported Obama so passionately in 2008 and 2012 was because I thought he understood this and had the spine to stand up to drama queens like McCain and armchair generals like William Jefferson Clinton. But it is beginning to appear that this president isn’t actually that strong. We voted for him … and he’s giving us Clinton’s and McCain’s foreign policy. If Cameron and Hollande want to pull another Suez, for Pete’s sake be Eisenhower – not Kennedy.

My cri de coeur is here. Don’t do it, Mr President. And don’t you dare involve us in another war without a full Congressional vote and national debate. That wouldn’t just be a mistake; it would be a betrayal.