OK.  So maybe we are a little self-absorbed right now what with congratulating each other on how well we survived and how much money we have raised for the victims.  The police are at all the events (Sox, Bruins, etc.) being honored.  And maybe everyone is laughing at us for letting the entire City be locked down for an entire day, but it worked for us.  I can’t imagine it happening in New York or LA or Philly.  Maybe San Francisco.  But Boston is pretty connected and compact and if you shut down the public transit, it gets difficult for many people to move around.  I’m sure someone will do a study on why Bostonians pretty universally listened to Governor Deval Patrick.  I wasn’t even in town and I got an alert voice mail.  Maybe it went on too long, but that’s a judgement call and after the fact.  I have read that the “shelter in place” order was lifted on suggestion from President Obama – which might be true, but I’m not sure at this point.  There are still a lot of rumors flying around and as with Newtown, Sandy, and all the other horrific events, we will know the real story months and even years from now.

I was happy to see Brian McFadden’s take on the situation. 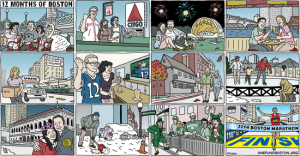 Yes, we are getting back to normal and there will be another Boston Marathon in 2014.  And we will learn the truth about what went on that horrible week.  But for now, the Sox are on a roll, the Bruins are in the playoffs and the Celtics stayed alive for another game.