I was checking into a hotel in Philadelphia minutes after the bombs went off near the finish line of the Boston Marathon and learned what had happened from the desk clerk.  For the next week, we followed the story mostly by reading the paper in the morning and sometimes catching a few snippets on television.  I had made the decision not to do email or any social media while I was gone.  I did have my cell phone on, mostly in case of a cat emergency at home or a Philly friend calling.  It was strange to be away from home and hearing about familiar places.

Things got particularly weird  for me late Thursday afternoon.  The authorities had just released the video of the suspects and in the tape was a person walking who resembled me.  I started getting text messages and calls from friends in Boston who wondered if it was me and if I were OK.  It wasn’t, but when we turned on the TV and watched the endless loop, the other “me” was easy to spot.  Blue jacket, ball cap, grey purse strap across the back.  A short woman, a little stocky.  As one of my friends said even after being reassured, “It really does look like you.”

I got home to a pile of papers and more information on the incident.  It was interesting to see what people got wrong in the early days and it should get more interesting as the investigation continues.  My husband and I were thinking that bombing like this are regular occurrences in other countries and in many ways we are lucky that our law enforcement can actually track the two kids who planted the bombs.  We will bring the survivor to trial eventually, but as someone, I think it was Senator Elizabeth Warren, said these are the early days of the investigation and this is not NCIS where crimes get solved in an hour.

James Carroll wrote this morning in the Boston Globe about the Boston Marathon, the votes in Washington against any regulation of guns, and democracy.  Here is some of what he said.

In 490 BC, the legendary runner brought urgent news to Athens of the Greek victory in Marathon over the armies of the Persian Empire. The Battle of Marathon secured a peace that ushered in the Athenian Golden Age, during which a vibrant democracy finally found the balance between the exercise of force and the fulfillment of human needs. Last week, as an American commemoration of the Battle of Marathon unfolded in Boston, that same democratic balance was dangerously stretched amid the Doric columns of Washington, where the Senate cast a tragic vote for violence.

Yet even our definition of “tragic” goes back to Athens, to the spacious imagination that flourished there — especially in the plays of Sophocles, who lived from about 497 to 406 BC. He taught us that every choice has its consequence, that character is destiny, that the exercise of power must always be measured by the health of the whole community. He also taught us that tragedy, when faced directly and bravely, leaves humans not diminished, but ennobled.

The traumas of Boston last week, culminating in the killing and pursuit of the men suspected of planting the bombs, were heartbreaking and repugnant, but they left the city whole. With all citizens commanded to “shelter in place” Friday while responsible officials conducted the manhunt, Boston was itself a character in the extraordinary drama. A vast ad hoc web of Internet users to whom law enforcement had appealed gave new meaning to the term “community policing.” The fugitives knew that an entire commonwealth had become their antagonist. This surely forced the drama’s denouement. There were no bystanders in Boston.

From Homer on, Greek culture honored competition (“agon” in Greek, which gives us the word “agony”). But in Athens, the philosopher Alasdair MacIntyre has explained, this spirit of contest was balanced by the politics of cooperation. The virtues of the first (discipline, bravery, self-actualization) meshed with the virtues of the second (empathy, humility, selflessness). Athenian democracy was the reconciliation of these opposites. Strength was joined to tenderness.

The Boston Marathon wonderfully embodies this balanced moral order, too: Every year the fiercely determined runners strive to be best (or for their personal best), while surrounded by multitudes whose cooperation makes the race so radically inclusive.

But death changes everything — a jolting transformation to which Greek tragedy itself gave first expression. “In the face of death,” as MacIntyre puts it, “winning and losing no longer divide.” Instead, competition drops away, and cooperation becomes the absolute mandate. That is precisely what happened in Boston, as the city held Martin Richard, Krystle Campbell, Lu Lingzi, and later Sean Collier in its heart.

Last week, a separate drama unfolded in Washington. “It’s almost like you can see the finish line, but you just can’t get there.” These words could have been spoken by thousands of Boston runners, but were said by the father of a shooting victim who witnessed the Senate vote on gun control.

We will, once again, show the world that we can have an investigation and fair trial.  And we will one day enact some sensible gun safety measures.  Watching the events unfold from a distance, I was proud of my fellow Bostonians, law enforcement and  public officials particularly Mayor Menino and Governor Patrick. 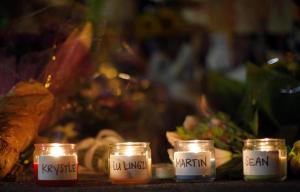 Candles for the victims.