He was, he says, completely wrong;
To care for everyone is vital.
He’s singing now a different song,
And “Etch A Sketch” is that song’s title.

Mitt seemed to agree with Obama a lot.
Divergence in policy got hard to spot.
He used all the moderate words he could muster.
So where was the Mittster’s past neocon bluster?
He knew that those still undecided would hate it.
The answer then is that the Etch A Sketch ate it.

Eric Fehrnstrom told us this was going to happen and it has.  I guess he is the one person in the Romney campaign who can tell the truth. 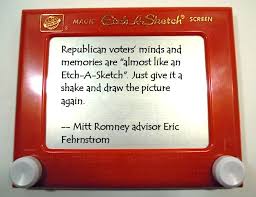