It is the summer of being fired.  The man who made the phrase “you’re fired!” was fired from a bunch of stuff:  The Apprentice, Macy’s, NBC, and the list goes on.  But Donald Trump has not been fired by the Republican Party.  There is a way to go before the first caucuses and primaries so there is time, but as long as he stays at 25% of the Republican vote it will be hard to fire him as a candidate.

But there was another Don fired this summer in Boston.  Don Orsillo, the Red Sox television play-by-play announcer.  The public announcement was made in a very ungracious way by NESN and the Red Sox brass while Don was on the air.  We can only suppose that he had been told in advance.  Chad Finn wrote in his column for Boston.com

We’re veteran bickerers and dedicated cynics around here – hell, it’s why two sports radio stations are not just sustainable but successful in Boston. We can’t get a consensus on which glove Hanley Ramirez should take to work each day, and yet the support for Orsillo is overwhelming. It says something about the man, I think. It’s a remarkable tribute.

The genesis of the consensus and the disappointment is fundamental. You feel like you’ve lost a friend.

Orsillo has been a television voice of the Red Sox since 2001 and the sole TV voice since 2005, when the excellent Sean McDonough’s tenurecalling the team’s games met a similarly graceless end.

To add the icing to the not so edible cake was the lack of comment from the Red Sox management.  When Tom Werner finally spoke he basically said nothing.  Steve Buckley wrote in the Boston Herald

It was going to be impossible for the Red Sox and NESN to move the popular and talented Don Orsillo out of the television booth without there being a major public outcry.

Still, the situation could have been handled better — with better timing and a whole lot more candor. But the news of Orsillo’s ouster was leaked out, as often happens in these cases, and then Red Sox/NESN management got quiet instead of getting out in front of the story.

Which brings us to the question of the day: Why, exactly, is Orsillo being replaced?

The answer, in the opinion of Red Sox chairman Tom Werner and NESN president/CEO Sean McGrail, is that they believe Dave O’Brien, currently the play-by-play man on the radio side, will be an upgrade.

I listen to the radio quite a bit and, yes, Dave O’Brien is good.  But the combination of Orsillo and Jerry Remy is what I call entertainment.  I don’t want to debate the merits of various play-by-play announcers, but to pay tribute to Don Orsillo.

Don Orsillo has stayed on the air without betraying any of the bitterness he has a right to feel.  Unlike the Red Sox owners, he is a consummate professional.  He will land on his feet somewhere and that will be Boston’s loss.  I wish him well.

I finished reading Francona last week and have been listening and reading to what people are saying about it.  In case you don’t live in Boston, follow the Red Sox, or follow another baseball team, Terry Francona was the manager of the Boston Red Sox from 2004 through the 2011 season.  Quite a long time in baseball years, particularly in Red Sox years.  He managed the team to their first World Series win (2004) in 86 years breaking the infamous curse of Babe Ruth.  And then one a second Series in 2007.  I loved seeing him in the corner of the dugout chewing his tobacco which he pretended was gum or maybe is was sometimes the other way around.  And I felt terrible as the 2011 season imploded in September.  I think we all knew that Francona wouldn’t be back for 2012. 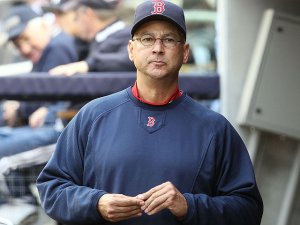 Terry in the dugout.

So now there is the book, Francona. by Terry and Dan Shaughnessy of the Boston Globe.  Some people don’t like it because they think it completely trashes the owners which makes me wonder if they have actually read the book.  Or maybe they are responding on behalf of the owners.  I had read some of the advanced reviews which said that he was not nice to the owners so I guess I looked for those parts in the book.  (for a nice interview with Terry by Emily Rooney, click here.)

The controversy appears to stem largely from his statement that the owners didn’t like baseball.  Taken out of context, this is a rather silly statement.  Why would you spend millions to own a team if you didn’t like the game?  But if you read the book, you learn that in Francona’s  world, where one lives and breathes baseball from a very young age, the owners are different.  They have other interests, like making money, and bring in fans.  Why else would they bring in a showman like Bobby Valentine after Terry?

There is a delicate balance between the purity of the game and the game as business.  Francona is on one side of that fine line, John Henry, Tom Werner and Larry Lucchino are on the other.  And that is the essence of the the matter.  In the end, Francona and Theo Epstein were on the wrong side from those that paid them.  I don’t think they were surprised.

I love baseball.  I like going to minor league games without all the show of the bigs to distract me.  I guess I’m like Francona in that tiny way.  If you love baseball and want an inside picture, read this book.

Red Sox pitchers and catchers report on the 12th; everyone else on the 15th.  I read that most of the pitchers have already arrived in Florida.  Bobby V. is thankfully gone.  New manager John Farrell is a baseball guy.  Maybe John Lackey will redeem himself.  Maybe we can give the young kids a chance to play and grow.  Maybe the Sox will have a winning year.  Francona is managing the Cleveland Indians and Theo is with the Cubs.  It’s spring time for baseball and anything can happen.