Julia Pierson, head of the Secret Service, testified before Congress yesterday on the security lapses that resulted in a fence jumper making it into the White House and then into the East Room.  But Omar Gonzalez in just one in a long line of uninvited guests.  Anyone remember the couple that got through security into a state dinner?  Peter Baker had a nice history of the uninvited in the New York Times.

Long before the latest fence jumper captured international attention by getting as far as the East Room, the history of White House security breaches was vast and varied. One intruder in a white karate outfit carried in a knife hidden in a Bible. A stranger slipped in to watch a movie with President Franklin D. Roosevelt. And a pilot crashed his Cessna into the mansion.

Theodore Roosevelt once agreed to see a man who identified himself as “Mr. John Smith” and insisted he had an appointment, even though the president did not recognize him. But after talking with him for a bit, Mr. Roosevelt quickly changed his mind. “Take this crank out of here,” he ordered an usher. In the man’s back pocket, it turned out, was a large-caliber pistol.

Pierson herself pointed out

…that before the most recent incident, 16 people had jumped the White House fence over the last five years, six of them this year alone. Many of them do not seem intent on harming the president, but are eager to draw attention to some issue or cause. One this year was a toddler who had slipped through the fence.

We seen to want the impossible.  We want our President and his family to be safe, but accessible.  And for much of our history, the President and the White House have been much more accessible than they are today.

During World War II, Franklin Roosevelt had just finished watching a movie when the lights came on and he discovered a stranger standing nearby. His predecessor, Herbert Hoover, came downstairs for dinner one night to find a man in the Blue Room who said he was just a sightseer. On another occasion, Mr. Hoover was having dinner with a movie producer in the State Dining Room when an intruder marched up, demanding an appointment.

During Ronald Reagan’s second inauguration, a man followed the Marine Band into the White House and wandered around for 15 minutes before being discovered. And of course, President Obama found himself with a couple of extra guests for a State Dinner in 2009, when the party crashers Tareq and Michaele Salahi managed to get past White House aides and the Secret Service even though they were not on an invitation list.

There have been shots fired (so far without hitting anyone) and President Tyler had stones thrown at him by an intruder in the White House garden.  But more disturbing are the aircraft that manage to penetrate the White House airspace. 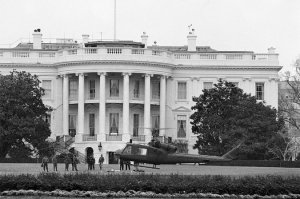 A helicopter stolen from nearby Fort Meade by an Army private landed on the South Lawn of the White House in 1974.

With all the ground protection, several men have tried to pierce the White House perimeter by air. An Army private stole a helicopter from Fort Meade in 1974 and flew it to the White House, where he landed on the South Lawn, took off again and then returned. Secret Service officers eventually opened fire on the chopper, forcing it down. The private survived and was sentenced to a year in prison. That same year, a failed businessman tried to hijack a Delta passenger jet at Baltimore-Washington International Airport with a plan to crash it into the White House, but was shot by the police while in the cockpit before takeoff.

In 1994, an unlicensed pilot who had spent an evening drinking and smoking crack cocaine stole a Cessna 150L and crashed it on the South Lawn in the middle of the night. The plane skidded across the ground, smashed into a magnolia tree and eventually came to a halt against the wall of the mansion. The pilot was killed, but the building was not seriously damaged and Mr. Clinton was not at home at the time.

President Andrew Jackson famously called the White House “the People’s House” but in the current climate, protection and screening would seem to be most important.  Perhaps President Obama should take satirist Andy Borowitz seriously.

President Barack Obama has decided to move his family into a full-service doorman building in Washington, D.C., saying that “it just makes more sense right now.”

“It really will work better for us,” Obama said in a press conference Tuesday morning. “In addition to the doorman, there’s a guy at the front desk, and, if anyone comes to see you, the desk guy will call up to your apartment first to make sure it’s O.K.” 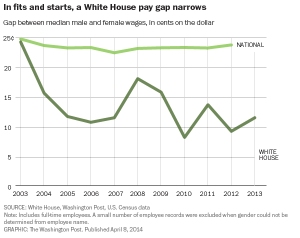 Is the gender gap in wages a myth or is it as the President said yesterday just math?  If a company pays, as does the White House and most other government agencies, equally for the same job, why is there still a gap in total pay?  Is that as Christina Hoff Summers would argue, not a wage gap since the cause is that women are in different job?  Christopher Ingraham wrote in the Washington Post

When asked about the discrepancy by reporters, spokesman Jay Carney said that those figures are based on the total of all staff jobs, and that women tend to fill more lower-paying positions than men. When you break it out by position, “men and women in equivalent roles here earn equivalent salaries,” Carney said. Incidentally, this is the pretty much the same argument that AEI scholar Christina Hoff Summers makes to argue that the gender wage gap is a myth.

Human Resource people (of which I was once one) would say it is all about classifying jobs.  There is an endless debate about what jobs require more skills, more effort, more responsibility.  Is the woman who comes to help your sick mother as a home health aide worth less than the man who manages the local convenience store? (Neither gets paid very well.)  Is a pre-school teacher worth less than the CEO of Facebook?  Ok.  I can hear people saying that I’m comparing apples and oranges, but these are the kind of things we need to consider as we look at not only the gender issues but also at low wage jobs generally.  If you look at the Washington Post chart, you can see that the national wage gap is pretty constant, but the general trend of the White House gap is down.

There are really several problems at work here.  First is the failure to pay women an equivalent wage for the same work done by a man.  This may be deliberate or the women may simply be given a different job title and classification.  The second is what the Institute for Women’s Policy Research calls occupational segregation.

Pay equity may also be impacted by other more subtle factors than workplace discrimination. IWPR’s research shows that, irrespective of the level of qualification, jobs predominantly done by women pay less on average than jobs predominantly done by men. Women have made tremendous strides during the last few decades by moving into jobs and occupations previously done almost exclusively by men, yet during the last decade there has been very little further progress in the gender integration of work. This persistent occupational segregation is a significant contributor to the lack of significant progress in closing the wage gap.

The third problem is one that speaks mainly to women in the private sector at high levels:  Women appear to be less willing to ask for more in salary negotiations.  While this is unimportant and insignificant, more women are hurt by the first two problems.

In the late 1970s I was working as a research analyst for the Virginia State Equal Opportunity Office.  We got a complaint from a woman professor at a state college who suspected that she was being paid less than a male colleague who started around the same time as she did.  They were, I think, both coming up for tenure.  This was the age before editable spreadsheets were common, but I managed to make a chart showing hire dates, educational levels, teaching load and teaching evaluations among other factors I can’t remember now for that department.  When laid out, it became very clear that the women, including the complainant were being paid less.  This set off a request for an analysis of the entire school as well as requests from several other state colleges and universities.  I ended up teaching people from the schools how to do this themselves since there was no way I could tackle such a large project on my own.  Problems were corrected, but I don’t recall that we ever compared  salary levels at the Department of Physics (probably mostly men) to the School of Nursing (mostly women).

I tell this story for two reasons.  One, the problem and issue has been around a long, long, time.  And second, I think we need to look harder at occupational segregation and, if we can’t totally solve that, we need to look at how we, as a society, value what we call “women’s work.”  In the end, that is the only way to cure the pay equity problem.

Politico.com had this great human interest piece today about Bob Smith who first played at the White House for Richard Nixon, but retired before George W.

Former White House pianist Bob Smith provided entertainment to presidents, their spouses and guests for more than 30 years. As such, he has plenty of stories to tell — like the one from his White House debut, with the Army Band Chorus, at Tricia Nixon’s 1971 St. Patrick’s Day engagement party. “My Three Sons” star Fred MacMurray arrived at the event seemingly inebriated and took up the saxophone.

“He was just horrible. … The most awful thing you heard in your life,” Smith recalled. President Richard Nixon asked Smith to “get rid of him,” and Smith, with help from the Secret Service, complied.

…First lady Pat Nixon, Smith said, used to bypass protocol and call him directly on his home phone to ask him personally to play various events—from background music at cocktail parties and receptions, to sitting in as accompanist to a hired musical act.

He later played for and with the Clintons and Gores

Later, he got along great with the Clintons. He and the president bonded over their shared love of playing music. Smith recalled several duets he played with Clinton on sax, an instrument “that was always in reaching distance” of the president.

He was in with the Gores, too.

“So while I’m doing saxophone things with [Clinton] at the White House, I’d go over to the vice president’s house, [where] Tipper Gore had her drum set set-up outside in the living room next to the grand piano. She’d come over and say, ‘Can I sit in?,’” Smith recalled. Tipper Gore was a “very good player,” he said.

Over the years, Smith also had numerous interactions with celebrity White House visitors, including Audrey Hepburn and Lena Horne, who sang along while he played. Cary Grant once skipped out of a White House dinner to sit outside the dining room at the piano with Smith. At the actor’s request, Smith said, the two played Cole Porter songs for over an hour.

Smith decided to retire when the Clintons moved out of the White House because, after playing for Bush 41 and spending time with the Bush family, he preferred leave before Bush 43 moved in.

President George H.W. Bush “was very cool,” Smith said. “But there were too many times where I saw [his son, President George W. Bush,] over that time where he was less than statesmanlike,” he laughed.

Maybe the Obamas should get him out of retirement.