I plan to open a bottle of champagne today and start celebrating early and I guess I’m not the only one.  I heard a story on NPR yesterday about Jim Hewes the bartender at the Willard Hotel Bar who has researched presidential history and created 44 drinks for our 44 Presidents.  I went looking for the complete list and found it on a Washington Post GOG blog.  So here, courtesy of NPR and the Post are some of those 44 drinks.

Hewes has certainly done his homework. Franklin D. Roosevelt represented by a Plymouth Gin Martini (the first drink he mixed up after the end of Prohibition), while James Garfield’s tipple is a Dewars Scotch, since industrialist Andrew Carnegie sent Garfield a case of Dewars to celebrate his inauguration.

Some of the list is based on conjecture: We don’t really know if Warren Harding ever drank a Seven and Seven, for example, though the mix of Canadian Whiskey and 7-Up was popular in his day. But it’s a fun and delicious trip through the history of drinking in America.

Hewes has even made some non alcoholic drinks for the teetotalers among our Presidents.

43. George W. Bush: Diet cola with a slice of lemon

Light and crisp, able to keep even the busiest Chief Executive, active, alert, and awake.

Served, much to the dismay of the fourth estate, throughout his four years in the White House.

Washington’s pressmen spiked the oranges with gin at the tea-totalling Hayes inaugural in 1877. 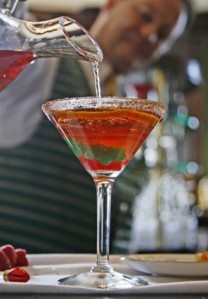 Is this the Coolidge cranberry with lime?  It looks like it might be. However I am much more interested in Cleveland, Madison  and Reagan who served champagne – or the California sparkling. Or in FDR or JFK who drank martinis.  FDR made his with Plymouth gin the way my husband makes mine. Some of the drinks sound pretty bad like James Monroe’s Sherry Cobbler.

The Round Robin Bar in the Willard Hotel is just a stone’s throw from the White House. Bartender Jim Hewes has been serving up drinks there for nearly 30 years.

“I’ve served presidents prior to their going to the White House and after,” he tells Jacki Lyden, host of weekends on All Things Considered, including Presidents Reagan, Ford and both Bushes.

The original Willard Hotel was built in the 19th Century. Abraham Lincoln slept there the night before his inauguration, and President Ulysses S. Grant would enjoy a drink and a cigar in the lobby.

Combines the president’s penchant for aged Tequila and the cool blue waters of the Pacific. Features aged Tequila, Curacao and fresh lime juice.

-Shake and strain over crushed ice

-Garnish with a wheel of lime and pineapple

So today we either celebrate or drown our sorrows.  Look at the complete list published by the Post and pick a drink.

Governor Christie of New Jersey thinks Mitt Romney will ace the debate tonight and turn the race upside down.  Let’s see.  Romney has had other game changing opportunities over course of the campaign the biggest being the Republican Convention.  What happened there?  His biographical film wasn’t done during prime time coverage.  Clint Eastwood talked to an empty chair and went over his allotted time.  Romney’s speech did not mention Afghanistan or American troops and, overall, was not very inspiring.

Tonight Romney will get another turn at bat.  The polls are still relatively close (more on them in a minute), but can the debate actually move the polls?

Ezra Klein writes in his Wonkbook this morning

Wonkbook’s number of the day: 0. That’s the number of recent elections that we can confidently say were decided by debates.

Gallup, for instance, reviewed their polls going back to 1960 and concluded they “reveal few instances in which the debates may have had a substantive impact on election outcomes.” Robert Erikson and Christopher Wlezien, in “The Timeline of Presidential Elections,” looked at a much broader array of polls and concluded that there was “there is no case where we can trace a substantial shift to the debates.” Political scientist John Sides, summarizing a careful study by James Stimson, writes that there’s “little evidence of [debate] game changers in the presidential campaigns between 1960 and 2000.

That’s not to say debates can’t matter, or that these debates won’t matter. The race remains close, and there are examples — 1960, 2000 and 2004, for instance — where  debates made a race more competitive, even if they didn’t clearly change the outcome. Simply closing the gap a bit would be a big win for Mitt Romney, if for no other reason than it would keep Republican donors invested in his chances going into the campaign’s final weeks.

One caveat to keep in mind, though: It’s not necessarily “the debates” that matter. It’s the debates plus the way the debates get spun in the media. There’s good evidence, in  fact, that the media’s spin is actually more important than the debates themselves. For more on that, read this article by Dylan Matthews, which is the best primer you’ll find on what we do and don’t know about what matters in presidential debates. The graphs are great, too

So going into the debate tonight (I’m writing this at about 7:30 am) where do the polls say we are?

There were nine national polls published on Monday, which are listed in the table below. On average, they showed Mr. Obama with a 3.5 percentage point lead over Mr. Romney.

That’s smaller than the leads we were seeing in national polls last week, which seemed to be concentrated more in the range of a five- or six-point lead for Mr. Obama. It also suggests a smaller lead than recent state-by-state polls seem to imply.

So has the race already shifted back toward Mr. Romney some? Perhaps, but this is less apparent from the trendlines within these polls.

If you compare the nine surveys released on Monday against the last time they were published (in all cases, the comparison poll postdates the Democratic conventions), only four showed a shift toward Mr. Romney. An equal number, four, showed Mr. Obama gaining ground instead, while one poll remained unchanged.

In all cases but one, the shift was extremely modest — within one percentage point in one direction or the other. The exception was a new CNN national poll, which had Mr. Romney closing his deficit from six points to three points.

On average, however, the polls showed only a 0.2 percentage point gain for Mr. Romney — not a meaningful shift in either a statistical or a practical sense.

That is what I had when I went to bed last night.  I woke up to the NPR poll results.  The headline says

but the text says

The latest poll by NPR and its bipartisan polling team [pdf] shows President Obama with a 7-point lead among likely voters nationally and a nearly identical lead of 6 points in the dozen battleground states where both campaigns are spending most of their time and money.

More than 80 percent of respondents said they planned to watch the first televised clash Wednesday and one in four said the debate could influence their vote.

If you are a Romney supporter that may give you hope.  But remember, Governor Christie, he hasn’t come up to snuff at any big moments yet.  Maybe that means the debate is the time.

But for me, the most interesting thing to emerge from the NPR polling was this question.

Now, thinking about the nation’s economy, do you believe the economy…

Almost half of those surveyed think the economy has bottomed and is starting to improve.  The economy was supposed to be Romney’s issue.

But let me leave you with two themes that are at least reasonably well in line with the consensus of the evidence.

First, although it’s unclear whether Mr. Obama’s polls have already begun to decline, it’s more likely than not that they will tighten some between now and the election. The Nov. 6 forecast prices in some tightening while the “now-cast” does not, so sometimes they’ll have a different take on the polls.

Second, you should continue to watch the divergence between state polls and national polls.

As of Monday’s forecast, Mr. Obama was projected to win 22 states totaling 275 electoral votes by a margin of at least 4.7 percentage points — larger than his 4.1 percentage point projection in the national popular vote.

That speaks to a potential Electoral College advantage for him. But it’s important to watch the states that are just on the brink of this threshold, like Nevada and Ohio, or those where the polling has been varied, like New Hampshire.

Without Nevada, for instance, but with the other 21 states, Mr. Obama would be projected to a 269-269 in the Electoral College — which he would probably lose in the House of Representatives.

If you are an Obama voter you can be cautiously optimistic going into the debate tonight.

The CDC says the best way to prevent swine flu is to wash your hands.  Here is a great story from NPR on washing effectively.

Grandma was right: If you want to prevent the spread of viruses, wash your hands.

But how long do we need to scrub? Preschoolers know the answer, and they sing a silly song or two to help them while away the 20 seconds that experts recommend.

Turns out that the “ABC” song is about right.  So pre-schoolers can practice hand washing and the alphabet at the same time.  But, as one of my co-workers said today, he’d get hauled away singing the alphabet song in the men’s room.  Allison Aubrey at NPR has a solution.

NPR’s reporters were quick to offer their suggestions: The chorus of Neil Diamond’s “Sweet Caroline” is about the right length. Maybe the guitar riff from “Layla” by Eric Clapton, or how about that famous bridge in Queen’s “Bohemian Rhapsody” about how “we will not let you go”?

For those more inclined to the theater, the first six lines of Lady MacBeth’s “Out, Damned Spot, Out” soliloquy clocks in at 22 seconds.

Also mentioned was “My Country ‘Tis of Thee” which is my choice only because I know all the words.  What ever you pick be sure to actually scrub and get the nails, the backs of your hands and between your fingers while you sing.