Jeh Johnson is likely to be the next Secretary of Homeland Security.  And no, I don’t know much about him either except that he gave the Obama Administration legal advice that basically approved drone strikes and he made a speech at Oxford University in 2012 saying that the war on terror had to end at some point because no country could be perpetually at war.  Johnson has also criticized the lack of transparency about drone strikes.  The New York Times reports

…In a speech at Oxford, he looked ahead to a day when Al Qaeda was so diminished that the United States could relax its posture and end the military’s legal authority to kill and detain terrorism suspects.

“I do believe that on the present course, there will come a tipping point — a tipping point at which so many of the leaders and operatives of Al Qaeda and its affiliates have been killed or captured and the group is no longer able to attempt or launch a strategic attack against the United States,” Mr. Johnson said at the time.

But he emphasized that he was not declaring the struggle to be over, stressing the danger of Qaeda affiliates in Yemen and in North and West Africa. He also suggested that even after the armed struggle ended, there could be a need to hold some detainees legally without trial for a period of time, as happened after World War II.

Earlier in 2012, Mr. Johnson delivered a speech at Yale Law School defending the proposition that American citizens who join Al Qaeda may be lawfully targeted for killing under certain circumstances.

But he has also criticized the Obama administration for being too secretive about matters like targeted killings using drone strikes.

“The problem is that the American public is suspicious of executive power shrouded in secrecy,” Mr. Johnson said in a speech at Fordham University this year. “In the absence of an official picture of what our government is doing, and by what authority, many in the public fill the void by imagining the worst.” 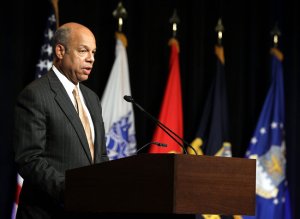 But Emily Heil has the best information on Johnson.  She reported this morning in the Washington Post “Eight Fact you didn’t know about Jeh Johnson.”

– His name is pronounced “Jay.”

– He and his wife, Susan DiMarco, met as children, but started dating only after Johnson visited her dental practice. He “endured three years of dental work before she agreed to a date with him,” according to their wedding announcement in the New York Times.

– His uncle, 2d Lt Robert B. Johnson, was one of the famed Tuskegee airmen.

-During his freshman year at Morehouse College, his grade-point average was a “dismal 1.8.”

– His grandfather, Charles S. Johnson, a prominent sociologist and participant in the Harlem Renaissance, was the president of Fisk University.

– He was once a law partner of the late Ted Sorensen,  John F. Kennedy’s speechwriter. Johnson called him “one of my personal heroes.”

– He once said in an interview that in his next life, he’d like to be an “NYC subway motorman, preferably the #7 Flushing line.”

And now you can amaze your friends with what you know about Mr. Johnson.