on the first enrollment period of the new Affordable Care Act, we are learning that a lot more people than a lot of people predicted have signed up for insurance.  President Obama is claiming 7.1 million people signed up on the health insurance exchanges – along with unknown numbers of others who signed up directly with insurance companies.  There was a claim yesterday that 90% of the enrollees had actually paid a first premium, a crucial step to being able to actually use the insurance.  We all know that there will be hassles when people go to their medical provider, when insurance cards don’t arrive in the mail, when someone with expanded Medicaid goes to a doctor who doesn’t accept that plan, but then, there have always been hassles with health insurance.  This will be nothing new.  What will be new is the massive number of new people suddenly looking for a provider.  Adjustments will have to be made all around.

But the biggest losers as of this morning would seem to be the opponents of the ACA or Obamacare as they call it.  Here is Dan Wasserman’s cartoon from this morning’s Boston Globe. 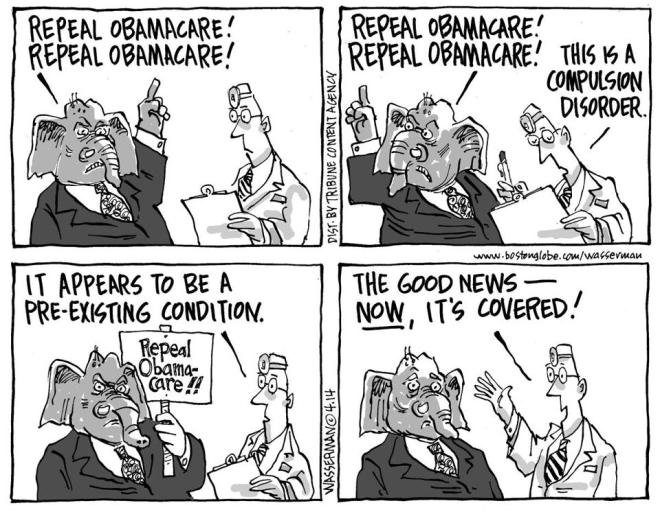 And then there is this story from Politico.

Back in the fall, conservatives seized on the flubbed Obamacare rollout as proof that President Barack Obama’s brand of liberalism doesn’t work.

Now, the law’s opponents aren’t about to say that critique was wrong — but they’ve lost the best evidence they had.

On Tuesday, Obamacare sign-ups passed 7 million, six months after the launch of a federal website that could barely sign up anybody. There are still a lot of questions about how solid that figure is, but the idea that the law could even come close to the original goal after such a disastrous start would have been laughable even a few weeks ago.

That’s left the critics questioning the early numbers or changing the subject. It’s a reminder that the attacks on the website were more than complaints about technology, but a proxy for a much deeper argument about what government should do and what it can’t do

But the Republicans do seem to be suffering from a compulsion disorder.  Here is Representative Paul Ryan quoted in the Politico story

And House Budget Committee Chairman Paul Ryan, who on the same day released a budget plan that would repeal the law, wasn’t fazed by the enrollment news.

“I think Obamacare is a slow-rolling fiasco. I think it’s a Pyrrhic victory,” the Wisconsin lawmaker said during a conference call with reporters Tuesday, at the same time that Obama was giving his victory speech in the Rose Garden.

But it was so much easier when they could just say the federal government can’t tie its own shoelaces. Now, they have to acknowledge that the government fixed the problem — and enrollment came roaring back.

Louisiana Governor Bobby Jindal is set to release his health care plan – I guess he is running for President.  According to the Washington Post

Louisiana Gov. Bobby Jindal will announce Wednesday a plan to repeal and replace President Obama’s health-care law, an effort by the Republican to insert himself into the increasingly competitive early maneuvering for his party’s presidential nomination.

In his 26-page plan, Jindal lays out a lengthy critique of the health law — which he refers to throughout as “Obamacare” — and reiterates his belief that it needs to be entirely done away with. In its place, he sets forth a bevy of ideas that have run through conservative thought for years, in some cases renaming them and in other cases suggesting new variations on old themes.

These themes appear to include giving those on Medicare a subsidy to buy private insurance and giving Medicaid money to the states to provide whatever care they decide on.  I have a feeling that this every-state-for-itself  idea will be proven to be a real problem as people in states that didn’t accept the expanded Medicare under the ACA are faced with citizens who won’t understand why Uncle Charlie can get health insurance subsidies and they can’t.  I don’t think this is a plan people will go for – especially after they get a feel for what is covered under ACA – but at least Jindal has something.

President Obama’s poll numbers are creeping up.  Democrats running for re-election would do well to be cautious about running away from the ACA, and optimistic me says that Nate Silver might just be wrong this time with is prediction that the Republicans have the edge in the mid-terms.  It won’t be easy for the Democrats:  They have to turn out their base in larger numbers than is usual for a mid-term, but it can be done.  Nate did favor Duke which lost in the first round of the NCAA men’s basketball tournament.