Yesterday a nine year old boy was shot by his fourteen year old brother.  It is an old story here in Boston as well as throughout the country.  After every death, officials, neighbors, clergy vow “Never again.”  But it does happen again.  And again. We don’t know exactly what happened in that apartment in Mattapan, but there are some things we need to look at and questions we need to answer.  The Boston Globe story has some of the details.

In what police described as a horrific tragedy, a 9-year-old boy was shot and killed in his family’s Mattapan apartment by his 14-year-old brother Friday morning, anguishing neighbors and prompting a plea from the city’s mayor for residents to surrender unwanted guns.

Just before noon on a school day, the older brother was playing with a gun when it fired, striking the younger boy in the chest, police said. The boy was rushed to Boston Medical Center, where he was pronounced dead.

The older boy left his Morton Street home, but was apprehended nearby still carrying the weapon police said was used to shoot his brother.

Question one:  Why weren’t the kids in school?  At least one of the schools left a message that the child was not in school, but the mother evidently wasn’t home. 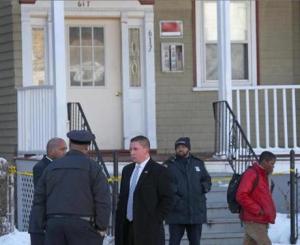 Police investigating the fatal shooting of a Mattapan boy outside the Morton Street home where he was shot.

Authorities charged the 14-year-old with unlawful gun possession and involuntary manslaughter, saying that he was handling the gun recklessly when it fired.

There was no evidence that anyone else in the home knew he had the gun, they said.

Authorities were quick to call the shooting an apparent accident, but homicide detectives continued their investigation Friday.

But was it an accident?  I’m not so sure.

Last June, police responded to the same address for a domestic violence report in which the 14-year-old allegedly slapped his younger brother in the face and threw him to the ground. His older teenage sister told police that he then pushed his mother to the ground and threatened to kill her.

In a police report on that visit, the sister stated the brother had “been very aggressive toward the family lately and that this was not the first time the police were called to their residence.”

The mother also told police that it was “not the first time” she had problems with her 14-year-old, according to the report. The older brother was charged with assault in the June incident.

Neighbors and police also said that officers had been previously called to the three-decker on Morton Street because of loud parties and, in one case, a shooting.

Question two:  Why were there no places to which the police could refer the boy?  We know that the Massachusetts Department for Children and Families is under a lot of scrutiny right now but we also know that generally the social workers are underpaid and overworked.  I expect that the independent study of DCF will show this.  DCF has refused comment on this incident.

At the scene, Mayor Martin J. Walsh called the death a tragedy and urged residents to turn in guns to police.

“A 14-year-old should not have access to a gun,” he said. “There are far too many guns in our streets.”

“I’m calling for the community to step up to the plate and report these guns. Parents, siblings — we need to get these guns off the street,” he added.

Daniel Conley, the Suffolk district attorney, said investigators would work to determine how the boy acquired the weapon.

“In the meantime, I want to make something crystal clear: If you know about an illegal firearm in this city, help us prevent another tragedy like this one,” he said.

Even my own state representative, Gloria Fox, called for tighter gun control measures.  Massachusetts already has some of the stricter laws, but this doesn’t seem to have really dealt with the problem.

Question 3:  Mayor Walsh has talked about treatment for all victims of gun and street violence.  Why didn’t he use this opportunity to call for more programs instead of asking people to turn in their weapons?

Yes, guns are a problem, but what troubles me about this incident is that there were clear warning signs.  We don’t know yet if there was any attempt at intervention, but I wonder if a nine-year old really had to die.

I have never liked the idea of casinos in Massachusetts.  I remember when they were going to save Atlantic City.  So now there is a nice strip along the boardwalk and the rest of the City and residents are in poor shape.  And resort casinos will have to go through a process including environmental reviews, design reviews, negotiations with the localities where they want to go.  At best, we are a couple of years away from even construction jobs. And with casinos in Rhode Island and Connecticut, are there enough people who want to gamble to create sufficient revenue?

DeLeo initially wanted to authorize two resort-style casinos and license the state’s four racetracks to operate slot machines. He eventually agreed on a bill to allow three casinos and two slot licenses. Patrick said he would sign a bill with only one slot license. After the Legislative session ended Saturday, he withdrew his compromise and sent a bill back that had no slot licenses. The Legislature would have to muster a two-thirds vote to override Patrick. DeLeo said he does not expect a return to session, meaning the bill is likely dead.

The editorial explains it well.

HOUSE SPEAKER Robert DeLeo’s decision to put the needs of the state’s racetracks ahead of all other interests is a staggering example of why voters worry about legislative excesses. His stubbornness has hurt his party and put a governor of his own party in a terrible bind. Thus, it’s a relief that Governor Patrick is standing up forcefully to the speaker, and he must continue to do so.

DeLeo has tried to corner Patrick into approving a gambling bill that allows slot-machine parlors at racetracks, insisting in a statement that a veto would “ “kill the prospects of 15,000 new jobs’’ and money for local aid. But it’s the speaker’s own intransigence that has put at risk the benefits that a more targeted bill could create. Patrick supports the licensing of three resort casinos, which would represent an enormous expansion of gambling in Massachusetts. But DeLeo has deep personal and political connections to the racing industry; his father worked in it, and it’s a major presence in his district. And the speaker was unyielding in demanding that racetrack owners be given special consideration in the gambling bill.

We have had the last couple of House Speakers leave under a cloud.  I can’t believe that Speaker DeLeo would risk even the appearance of a conflict of interest to get the race tracks in his districts slot machines.

I do play the lottery on occasion and I complete  the March Madness bracket every year, but casinos and slot machines have consequences beyond the creation of jobs and revenue for the state.  Thank you to my State Reps, Gloria Fox and Jeff Sanchez and my state Senator, Sonia Chang-Diaz for voting no.  Thank you also to Governor Patrick for standing on principle.