“The Princes in the Tower” (Photo credit: Wikipedia)

I am a re-reader.  If I like a book, particularly a mystery, I will read it again.  Josephine Tey is a writer I first read in high school when I was introduced by my mother.  I remember thinking at the time that ‘The Daughter of Time” was one of her least interesting stories.  After all, Alan Grant is in a hospital bed reading books about Richard III and sending researcher Brent Carradine to look for answers about someone who died 400 years before.  I believed in the Thomas More/William Shakespeare version of Richard.  I was probably fourteen.  But since then, I have re-read it several times and since the discovery of Richard’s bones have done so again.

It is a very carefully constructed guide to how to conduct an investigation.  Grant starts out with one of his nurses’ history books from school and moves on to more complete histories of Richard and England.  He finds out that Thomas More, although written as if he were a witness to the events surrounding the princes in the tower, was actually between 5 and 8 years old.  Grant and Carradine go to original sources for answers to the kinds of questions anyone conducting an investigation would ask.  Who benefits?  What were people saying at the time?  Where were the relevant people at the time of the alleged murders?  Who was still alive after Richard died?

There are many, like Winston Churchill, who are unconvinced by Tey.  Thomas B. Costain presented much the same evidence as Tey in his history, “The Last Plantagenets.”

There is no question that Richard had been an excellent administrator of north England, including York.  At the end of the book, Grant lays out his case.

In the matter of the presumed crime:

(a)  He did not stand to benefit; there were nine other heirs to the house of York, including three males;

(b)  There is no contemporary accusation.

(c)  The boys’ mother continued on friendly terms with him until his death, and her daughters attended Palace festivities.

(d)  He showed no fear of the other heirs of York, providing generously for their upkeep and granting all of them their royal state.

(e)  His own right to the crown was unassailable, approved by Act of Parliament and public acclamation; the boys were out of the succession and of no danger to him.

(f)  If he had been nervous about disaffection then the person to have got rid of was not the two boys, but the person who really was next in succession to him:  young Warwick.  Whom he publicly created his heir when his own son died.

And Grant’s case against Henry VII.

(a)  It was of great importance to him that the boys should not continue to live.  By repealing the Act [Titulus Regulus] acknowledging the children’s illegitimacy, he made the elder boy King of England and the youngest boy the next heir.

(b) In the Act which he brought before Parliament for the attainting of richard he accused Richard of the conventional tyranny and cruelty but made no mention of the two young Princes.  The conclusion is that at that time the two boys were alive and their whereabouts known.

(c)  The boys’ mother was deprived of her living and consigned to a nunnery eighteen months after his succession.

(d) He took immediate steps to secure the persons of all the other heirs to the crown, and kept them in close arrest until he could with the minimum of scandal get rid of them.

(e)  He had no right whatever to the throne.  Since the death of Richard, young Warwick was de jure King of England.

I can’t predict whether the discover of Richard’s bones will lead to his rehabilitation as a ruler, but Tey makes an interesting case in his favor.  If you like mysteries or history or both, I recomment “The Daughter of Time.” 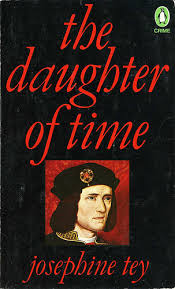