He was convicted of two counts of domestic violence resulting from a date – or a hook-up – gone very wrong.  State Representative Carlos Henriquez was sentenced to 2 and a half years and has to serve 6 months.  This happened on January 15 and I’ve been thinking about it ever since.  Much of the debate centers around his sentence since in Massachusetts most first time offenders are told to stay away from the victim and go to a batterer’s program.  Henriquez is planning to appeal.  The Boston Globe reported

State Representative Carlos Henriquez will spend six months in prison after a jury convicted him Wednesday of holding down a woman and punching her in the chest after she refused to have sex with him.

Jurors convicted Henriquez of some of the acts of violence he was accused of, but acquitted him of others.  The lawmaker was found guilty of two counts of assault and battery, but he was acquitted of a charge that he had struck the victim in her face. Jurors also found Henriquez not guilty of witness intimidation and larceny.

Dressed in a dark suit and tie, Henriquez was without expression as Cambridge District Court Judge Michele Hogan said she was sending him to prison in part because of the serious nature of his crime and because of his refusal to accept responsibility for his actions. 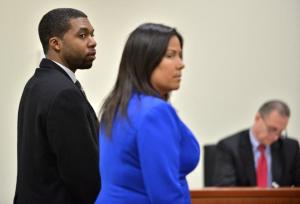 I have to interject here that I worked for Carlos’ mother, Sandi, for a number of years and he occasionally stopped by the office.  She is now a high-ranking official at HUD.  His late father was a community activist and very involved in the Dudley Street Neighborhood Initiative not too far from where we live.  Carlos had a promising career ahead of him but something happened.  The incident for which he was convicted occurred not too long after his father’s death and with his mother mostly in Washington, perhaps he felt adrift.  The family always appeared to be close and he lived in an apartment connected to the family house. But this does not excuse what happened.

A few days after his conviction, Farah Stockman wrote a compelling piece published in the Globe opinion section.

You know your political career is on the rocks when the evidence that is produced in your assault trial is a fake fingernail. Bright pink.

What’s the jury going to think when they see that fingernail, found in the Zipcar you drove when you picked up the 23-year-old college student who accuses you of hitting her after she refused to have sex?

Are those jurors thinking: “A Zipcar! What an ecologically conscious elected official?” Probably not.

You know your reputation as an up-and-coming politician is bound to suffer when the most compelling evidence in your favor is a series of racy messages between you and said college student, sent from your VoteforCarlos e-mail. Katherine Gonsalves picks you out of the crowd at a community meeting, and asks to interview you for a class paper. Days later, she’s asking: “Are you still coming out to play tonight?” You’re a 35-year-old man. You’re Carlos Henriquez, representing the 5th Suffolk district. You’re the son of a well-known political family. A man whose endorsements are sought in mayoral campaigns. But you answer: “For Sure. I hope you are ready.” And you spell it F-O-S-H-O. Then you misspell her name in your phone.

Five months later, she’s begging you to come over. “Babe, I miss you,” she texts. You’re too busy, making the kind of neighborhood appearances that got you elected. Late into the night, she’s still trying to get you to pick her up. She describes partying with her sister and her sister’s friends, drinking. Your response: Send the address if you want to have sex.

Monica Lewinsky, anyone?  Anthony Weiner?  Elliot Spitzer?  Or even worse, Chandra Levy who ended up dead in Rock Creek Park.  Even though someone else was convicted of her murder, suspicion ruined the a California Congressman, Gary Condit with whom she had been having an affair.  Sex and politics are a lethal combination.  Elected officials seem never to learn and in the Henriquez case, there is not only political ruin but jail time.

You pick her up. You both climb into the backseat of the car. What happens next defines both of you, maybe for the rest of your lives. She tells you she can’t go home with you as she had planned because her mother caught her sneaking out of the house. You complain that she dragged you all the way over here. You argue. She pulls out a cell phone and tells you she’s recording you. Do you struggle over the phone? Steal the SIM card? Do you backhand her, punch her, and choke her — and then climb into the driver’s seat and drive into Boston, without ever giving her a chance to get out of the car?

Or did everything happen differently? We don’t know your side of the story because you never take the stand. All we know is that your defense itself is unflattering: Your lawyer says you only wanted sex, but Gonsalves wanted more, and went “Fatal Attraction’’ when she didn’t get it.

I heard the evidence at the trial and I’m still not sure exactly what happened in the car that night. Justice, at its best, is an approximation. In the end, the jury — five women and three men — had an easier time picturing Carlos Henriquez beating a young woman than that young woman making it up, bruises and all.

Carlos Henriquez is clearly guilty: if not of assault, then of really poor judgment. In court, Gonsalves looked miserable in the witness box. Henriquez looked miserable at the defense table. Once, she stole an awkward glance at him. I felt sorry for them both.

So why sentence him to jail time?  On the surface, the only difference between Henriquez and other men who are convicted of domestic violence and get sent to a batterer’s program is that he is an elected official.  Unfortunately for him, the incident comes on the heels of the Jared Remy case.  Jared Remy was in court for beating up his girlfriend and mother of his child the most recent in a series of incidence with increasing violence.  He was released and, the next day, she was dead.  I think the trial is this summer.  The DA has said that releasing him was an error.

My question is this:  why have men been let off the hook so easily in the first place?  If I am right and the Remy case served as a wake-up call to the criminal justice system, the sentence of Henriquez to jail time was fallout.  When other men are also given jail time, we will know that things are finally changing for the better.

And a final word to Carlos:  Please resign.

2 thoughts on “The state rep and domestic violence”