Yesterday Joanna Weiss wrote a column in the Boston Globe in which she asked her readers to imagine Mitt Romney as Mayor of Boston.  After I stopped laughing, I began to think of all the reasons why this was not only a bad idea, but why Mittens would never make as good a mayor as Thomas M. Menino.

The beauty of a mayorship, as far as Romney goes, is that it’s less an ideological job than a technocratic one. Without the desire to use his office as a stepping stone, Romney would be free to problem-solve, to do the kind of work that made him an appealing public servant in the first place.

She goes on to cite several examples like the new flyover to Cape Cod which fixed the Sagamore Bridge problem and Massachusetts Health Reform (which was a largely Democratic idea) of examples of his technocratic skill at work when he pretended to be governor of Massachusetts.  Weiss seems to be under the impression that Mitt could be another Michael Bloomburg.  Somehow I don’t think so.  Can you see Mittens taking the Orange Line to work from his new mansion in Jamaica Plain?  Or the Red Line from Savin Hill?

So what if he never did well with the little folks? Mayor Mitt wouldn’t have to go to every ribbon-cutting or community meeting. That’s Menino’s thing. Mitt could be the fixer, the big-picture guy, ensuring that Boston keeps wielding an outsized influence on American life.

Right, Joanna.  A large part of what makes TMM a success is that everyone who lives in Boston has met him.  At least it seems that way.  And he cares about the 47%, a large number of whom make up the Boston population.  This is why a new idea was unveiled today.

Starting Wednesday, residents can pay parking tickets and tax bills, get a library card and dog license, even register to vote, at a van dubbed “City Hall To Go.” A newly refurbished bomb squad van, the vehicle was made to resemble a food truck, but is essentially a rolling office, outfitted with laptop computers, wireless access, and the necessary paperwork from a host of city departments.

City officials say the program is the first of its kind nationally, and they hope it proves a convenient alternative for residents who do not use the Internet or rarely get downtown. 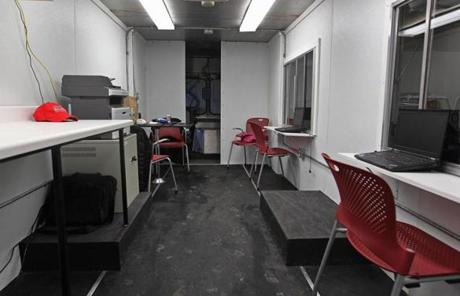 The interior of the City Hall To Go truck has laptop computers and wireless Internet access.

Staff in the mayor’s office say the rolling City Hall provides “one-stop shopping, where residents can take care of several tasks at once.” Workers can provide information from school registration forms and summer camp guides for parents to tax exemption forms for the elderly.

The idea for the moving service sprang from meetings in City Hall this summer and was later proposed by several residents as a suggestion for The Mayors Challenge, a national competition designed to spur ideas to improve cities.

Menino, known for his atten­tion to neighborhood concerns and quality-of-life issues, quickly lent his support.

In a statement, Menino said the pilot program will show that “government can change” to become more flexible and convenient.

“City Hall To Go builds on our mission to shake up the status quo in municipal services and offer a new way for Boston residents to get information and engage with the city on a whole host of services we offer,” he said.

I do hope that Weiss was trying for humor in her promotion of Mitt for Mayor, because somehow I doubt that at idea like City Hall to Go would have been either solicited as an idea or implement by him.

Given his age and health, it may be time for Mayor Menino to retire gracefully from the picture, but there are many homegrown candidates who could be mayor.  Men and women who know where Hyde Park and Mattapan are and care about our neighborhoods.

John Boehner as Majority Leader has, so far, appointed one woman to chair a House committee.  All both men and women are white.  The lone woman, Candice Miller, will head the Administration Committee.  In contrast, Nancy Pelosi has announced that she is appointing three women to be the ranking minority member on Appropriations, Finance, and Rules.

Rep. Nita Lowey — Bronx-born, Jewish and Mount Holyoke-educated — was tapped  to be the ranking Democrat on the House Appropriations Committee on Tuesday,  making her the highest-ranking woman in the history of that once hidebound  Southern male enclave that famously resisted hiring even female secretaries for decades.

The 75-year-old New Yorker will succeed retiring Rep. Norm Dicks (D-Wash.) in  the new Congress just as Rep. Maxine Waters (D-Calif.) will move into the  ranking spot on the House  Financial Services Committee, replacing Rep. Barney Frank (D-Mass.).  Together with Rep. Louise Slaughter (D-N.Y.) in the Rules Committee, they pose a  remarkable trio for Democrats: women leading the opposition party in three of  the House’s five most exclusive committees.

Two white women and one African American.  When you have power over money and rules, you begin to have real influence.

And the vote to appoint Representative Lowey was between two women.

Among the top committee posts voted on Tuesday by the Democratic Steering and  Policy Committee, Appropriations was the only real contest. Lowey had to first  get around another woman, Rep. Marcy Kaptur (D-Ohio), who enjoys more seniority  on the panel but less of a following in the party.

In a secret ballot, the New Yorker prevailed easily, 36-10, and by prior  arrangement, the two lawmakers had agreed not to contest the outcome in the full  caucus. Seeing the handwriting on the wall, Kaptur joked beforehand of being the  Toledo Mud Hens vs. the New York Yankees: “I’m just happy to be in the league,” she told reporters.

Unfortunately, there are not enough Republican women in Congress for them to compete for a position.  I don’t expect the picture to change as long as the Republicans continue to hold such anti-women positions.