The Cosby show Huxtable family was never the “typical” African American family or really a typical American.  For one thing, they lived in a New York brownstone had a doctor father and lawyer mother (who were happily married to each other), and they had, with five kids, a larger family than most.  The Cosby Show which premiered in 1984 was revolutionary in depicting through a sit-com format, a happy and successful black family.  Yes, it told America, black people are successful and have the same goals and the same problems as other families.  Whether we were like a sit-com family or not, all of us of a certain age secretly wanted to be like the Nelsons or grow up like the Beaver.  Then we had the Huxtables. 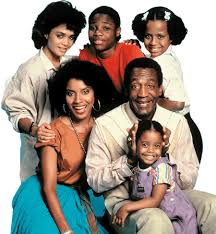 I ran across this story in the Guardian this morning wondering if the Obama family were not somehow the real life Huxtables.

Americans have always been fascinated by the lives of first families, much as Brits are with the royal family. The people who live in the White House however, unlike the occupants of Buckingham Palace, are meant to reflect ordinary lives and hopes and dreams. It rarely happens, of course. Nobody would say the Kennedys, the Reagans, the Clintons and the Bushes were normal folks. But many Americans do recognise themselves in the Obamas.

“From the kids with braces and basketball games to the Portuguese water dog and the date nights, the Obamas are right out of central casting as an upper-middle class American family with, of course, the very big exception that they live in the White House,” says Isabel Wilkerson, the first black woman to win a Pulitzer prize for journalism and the author of The Warmth of Other Suns, a book that documents the migration of black Americans across their own country.

“I think they’ve exposed the country and the world to a slice of African-American family life that is larger than many people realise – college-educated people with high ideals for their children. They’re like The Cosby Show come to life. They have endured an intense amount of attention and scrutiny and come out about as normal and quintessentially American as anyone might hope to see.”

I think the Obamas have worked hard to make life in the White House as normal as possible.

…Michelle Obama is the “mom-in-chief” but she expects the president to do his share.

When the children were younger, she has said she would rise early to go to the gym and her husband would feed and dress the girls. The family sits down to dinner at 6.30 most days when he is in Washington, and on Sunday afternoons the president has a standing date to play basketball with his daughters. They try to make their White House quarters as much like a normal home as possible. The girls have to clean their rooms and make their beds, and Malia does her own laundry. There is no TV until homework is finished.

With four more years in the White House, the Obamas are aware that their daughters will spend their formative teenage years in the spotlight. The press corps in Washington has agreed not to routinely write about the girls unless they are with their parents at formal events. Both girls are regularly spotted around town with their friends and they have been allowed rite-of-passage experiences such as attending summer camp – though with secret service agents in tow.

I know the President has joked about the moment his daughters start to date saying he won’t be too worried because they have men with guns with them.

“I think they are the first kids in the White House growing up where everybody’s got a cell phone and everybody’s watching,” Michelle Obama told the women’s website iVillage last month. She has warned her daughters not to be “bratty”. “You may be having a moment but somebody could use that moment and try to define you for ever,” she told them.

So far, it seems the girls are making their parents proud. There was a touching moment on stage last week when 11-year-old Sasha nudged her father several times as he celebrated his win. “Turn around, Daddy!” she said, urging him not to forget the people on the other side of the stage. He duly heeded her advice and the crowd roared its approval.

We Americans should be proud that we have a real family in the White House.  Whether the Obamas are the Huxtables or not, the girls are fun to watch grow up.

The Obama family on November 7.  Photography by Jason Reed/REUTERS