Tony Kushner, the Pulitzer Prize winning playwright, was awarded The Nation Institute Puffin/Nation prize for creative citizenship on December 5, 2011.  He won the Pulitzer for “Angels in America” in 1993.  Last June Kushner was first awarded, then not awarded and finally awarded a honorary degree from John Jay College of Criminal Justice in New York, part of the City University of New York System.   The controversy centered on Kushner’s alleged failure to support Israel.  The process of being chosen for the Puffin had a lot less drama , but his acceptance speech had it all:  drama, humor and a call to citizenship.  Published in the Nation, it is well worth reading or viewing. So what is citizenship?  Kushner defines it this way

…the whole point of citizenship is that one admits to a personal stake, and to the potential derivation of benefit, in giving to and sacrificing for the community. One recognizes one’s self in the community, one identifies an important part of the self, a part that deserves tending and nurturing and attention, even therapeutic attention, as much as does the selfish self, which of course receives infinite attention, tending, caring, nurturance. When we step into our citizen selves, we step into that part of our lives, our souls, that exists only in relationship to others. As a citizen, one occupies that part of one’s life, soul, self that is at least as communal, collective, social and contractual as it is monadic, individual, replete.

Citizenship, in other words, is not simply a duty, though of course it is that, nor is it merely a privilege, though it’s that too. It’s a blessing, by which I guess I mean that there is beauty, grace, magic, charisma, charm in citizenship; it’s a gift handed down to us from generations of forebears who thought and fought and struggled and died to create this thing we inherit and advance, this recent, numinous evolutionary phase of humanity.

Kushner, who is working a film about Abraham Lincoln, continues

…Maybe it’s because I’ve spent the better part of five years trying to make up a plausible version of Abraham Lincoln, that utterly implausible man. Maybe because of the time I’ve spent with his words and his life and the inexplicable fact of his existence, I’ve come to consider what Walt Whitman said may have been Lincoln’s greatest virtue, his “longwaitingness,” as a cardinal principle of democratic progress. Maybe because of Lincoln, I’ve come to believe that an unexamined, reflexive excess of even righteous impatience is an unaffordable means of keeping oneself warm in the chilly climate of democratic politics. Maybe it’s Lincoln’s fault that I’ve come to believe that electoral politics, and all that goes with it, is the last, best hope we have.

(Here I interrupted my prepared speech and risked spontaneity in response to seeing Jesse Jackson seated at a nearby table. His campaign for president in 1984 had been mentioned by the evening’s host, Melissa Harris-Perry, and I took the chance to thank Reverend Jackson for his speech at the Democratic convention that year. I’ve often quoted him admonishing those on the left who were considering not voting: “Don’t you walk away from that vote! People died for the right to vote!”)

(A great president, by the way, is not the same as a great progressive. A great president is a plausible progressive who achieves significant and useful and recognizably progressive things, which is very, very hard to do in a democracy, and which President Obama has inarguably done. We can argue about that later.)

…So, for the sake of my soul and my psyche and in the name of creative citizenship, I’m going to donate this mortifying, beautiful money [$100,000] to establish an endowed scholarship at John Jay. I was dazzled by the students I met at the John Jay commencement last June; they’re as impressive and promising and brave and inspiring and awe-inspiring as the CUNY board of trustees isn’t. At John Jay I’ve met students and faculty committed to thinking about law and order in larger contexts, to understanding law as it relates to community and to social and economic justice; they’re committed to building, to creating, to citizenship, to progress, to justice. 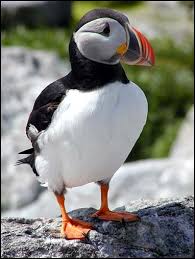 a puffin in Maine.