This week Kenneth Feinberg announced the list of banks that took tax payer money while paying our huge bonuses.  On NPR, John Ydstie reported that

In the fall of 2008, with the financial system on the verge of collapse, 17 large banks that were being propped up by taxpayers doled out $1.6 billion in bonuses.

According to Feinberg, “…many were over $10 million per individual.”

And what exactly have these individuals done with their bonuses?  Have they created jobs?  I don’t think so.

Which brings me to the tax cut which is looming as the next hot potato for the Democrats and for President Obama.  We all remember the conversation the President had with Joe the Plumber during the campaign during which Obama, who clearly thought he was talking with someone rational, tried to explain that he was not going to raise taxes on the middle class. 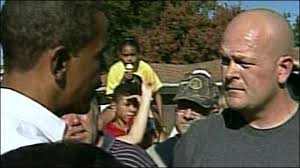 Democratic leaders, including Mr. Obama, say they are intent on letting the tax cuts for the wealthy expire as scheduled at the end of this year. But they have pledged to continue the lower tax rates for individuals earning less than $200,000 and families earning less than $250,000 — what Democrats call the middle class.

Most Republicans want to extend the tax cuts for everyone, and some Democrats agree, saying it would be unwise to raise taxes on anyone while the economy remains weak. If no action is taken, taxes on income, dividends, capital gains and estates would all rise.

We do not buy into the theory that because the economy is still recovering, extending tax cuts for the highest earners is a necessary or effective policy response,” said Gene Sperling, counselor to Mr. Geithner.

“While we are supporting measures like small-business lending and tax cuts to spark growth,” Mr. Sperling added, “it is also important to show the world that we are following through on our commitment to long-term fiscal discipline.”

Senator Bernie Sanders of Vermont makes the case for the change in the Nation.

The American people are hurting. As a result of the greed, recklessness and illegal behavior on Wall Street, millions of Americans have lost their jobs, homes, life savings and their ability to get a higher education. Today, some 22 percent of our children live in poverty, and millions more have become dependent on food stamps for their food.

And while the Great Wall Street Recession has devastated the middle class, the truth is that working families have been experiencing a decline for decades. During the Bush years alone, from 2000-2008, median family income dropped by nearly $2,200 and millions lost their health insurance. Today, because of stagnating wages and higher costs for basic necessities, the average two-wage-earner family has less disposable income than a one-wage-earner family did a generation ago. The average American today is underpaid, overworked and stressed out as to what the future will bring for his or her children. For many, the American dream has become a nightmare.

But, not everybody is hurting. While the middle class disappears and poverty increases the wealthiest people in our country are not only doing extremely well, they are using their wealth and political power to protect and expand their very privileged status at the expense of everyone else. This upper-crust of extremely wealthy families are hell-bent on destroying the democratic vision of a strong middle-class which has made the United States the envy of the world. In its place they are determined to create an oligarchy in which a small number of families control the economic and political life of our country.

The New York Times story points out how difficult changing the tax policy will be as it will involve many different element.

Congress must also wrestle with the estate tax, which lapsed last year but will automatically be reinstated effectively at a 55 percent rate on Jan. 1 for estates larger than $1 million. Lawmakers must also deal with an array of other provisions, including tax rates on dividends and capital gains, and the Alternative Minimum Tax, which has been adjusted annually to prevent millions of middle-class families from paying higher tax bills. The child tax credit would also be reduced.

So what should the strategy be?

Negotiations are expected to start in the Senate, where it is hardest for Democrats to advance legislation because of Republican filibusters. But some Democrats say a fallback plan would be to have their larger majority in the House approve a continuation of the lower rates just for the middle class right before the election, almost daring Republicans to oppose them.

In that case, Democrats say, Republicans who opposed the bill would be blocking a tax cut for more than 95 percent of Americans to defend tax cuts for a relatively few wealthy households. Republicans are readying an arsenal of economic data to portray the Democrats as endangering the precarious recovery and harming small-business owners, some of whom are taxed at the top personal income tax rates.

But some lawmakers, including Mr. Wyden, [Senator from Oregon] say the deficit concerns and the attention on the debt commission could help forge a deal: a short-term continuation of the tax cuts for the middle class, and perhaps some new tax breaks for businesses, that would buy lawmakers time to undertake a broad overhaul of the tax code in the next Congress.

I am not an economist, but won’t the revenue generated by increasing taxes on wealthy individuals and corporations making over a certain amount – or that off shore their jobs-  help the deficit?   And I wonder if some are not actually paying more on their unemployment than those bankers are on their bonuses?